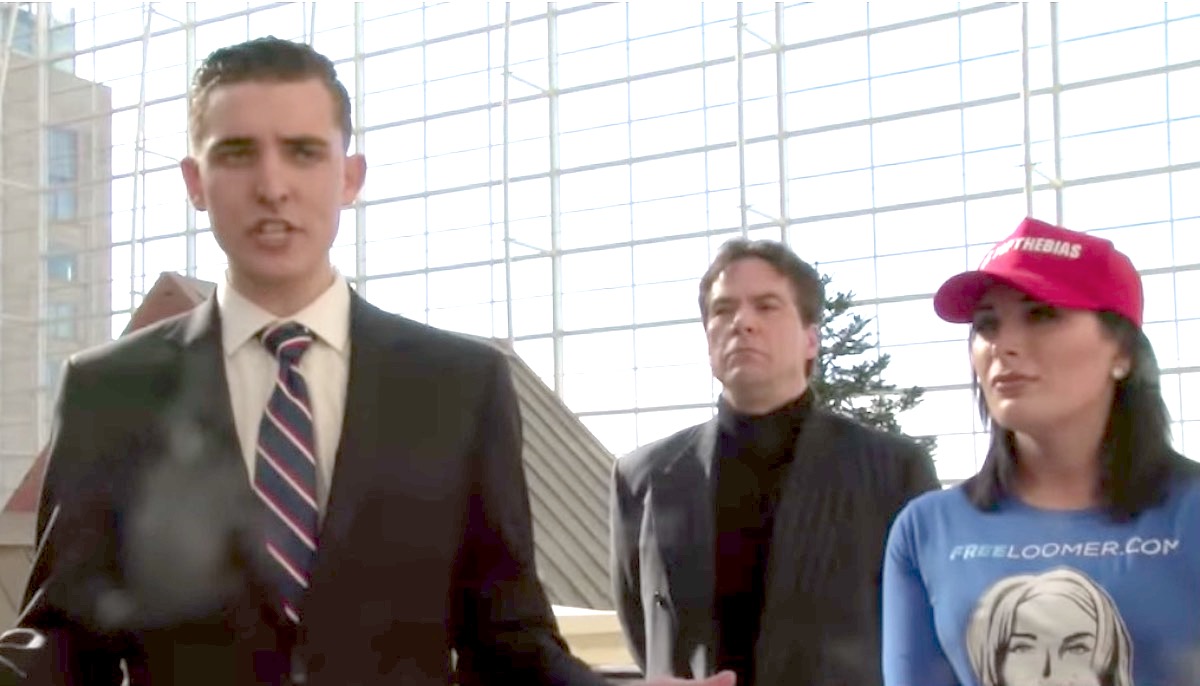 Earlier this week, it was revealed that 21-year-old super right-wing professional conspiracy theorist Jacob Wohl may have filed false police reports regarding “terroristic threats” that he appears to have staged against himself.

Wohl and Laura Loomer—most famous for being that woman who’s constantly trying to get you to remember who she is via nonsensical one-woman protests against nothing—were in Minneapolis recently, filming a documentary about a bizarre and provenly untrue conspiracy theory regarding Ilhan Omar. The two claimed to be so scared that Omar would send someone after them that they were traveling around in bulletproof vests and with a “top-notch security team,” conveniently stationed just off camera so “you can’t see them,” as he swears in one clip.

At one point, Wohl went to the Minneapolis Police Department to report threats he said they’d been getting since arriving in town. He specifically focused on one threat that supposedly read “I hope you f***in know that if [I] bump into you in Dinkytown or anywhere else in my city I’m going shoot you and sh*t on your f***ing bodies. Get that f**k out my city you piece of sh*t. Now.”

Wohl seemed to think this was a serious enough threat to include it in the documentary.

But as NBC and The Daily Beast noted, the account that made that threat was fake, and it’s not just any fake account; it’s one of the fake accounts Wohl himself was booted from Twitter for creating.

The account Wohl created was for “Drake Holmes,” a “Minneapolis born and raised … diversity coordinator” whose bio says he hates “racists, homophones, and bigots.”

He also misspelled his own name in his handle, @drakehomes612.

Jacob Wohl created “Drake Holmes,” a “Minneapolis born and raised… diversity coordinator” with a rainbow flag in his bio.

“Drake” misspelled his own last name in his username, @drakehomes612.https://t.co/YaebbLy5eR pic.twitter.com/dqm6cI4OcK

The Twitter account Jacob Wohl is accused of using to send death threats to himself before reporting them Minneapolis Police included an avatar image of an actual Minnesota real estate agent who had nothing to do with this.

The man whose photo was stolen, allegedly by Jacob Wohl to create a fake account to send himself death threats, has retained an attorney.

This isn’t the first time Wohl has been accused of creating a hoax. Last fall, he appeared to have been behind those fake accusations of sexual assault against Robert Mueller. In that case, as now, Wohl looks to have invented the person making those claims, all apparently for the purpose of getting to be the one to expose them to the world.

This case, though, is perhaps much more serious, as it involves Wohl filing a fake police report. The report names “terroristic threats” and a “Homeland Security offense.”

A false police report regarding fake domestic terrorism over one’s political beliefs? I’m sure Wohl will be facing his 16-count felony charges any day now, right?

All of the conservatives who were so horribly gleeful about Jussie Smollett are oddly silent about Jacob Wohl. https://t.co/ky5Hc9ARsj