J.K. Rowling Describes “Blackmail” by The Sun During Hacking Testimony 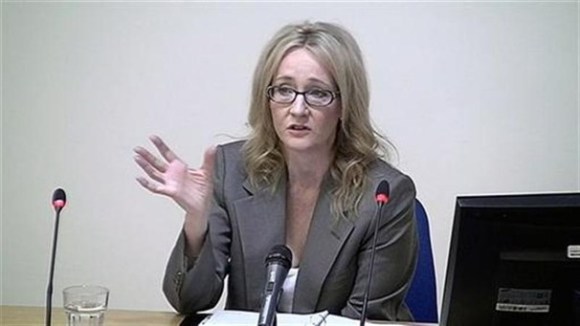 Harry Potter author J.K. Rowling testified last week in the phone hacking inquiry taking place in Britain, and her experiences with various News Corp media outlets are nothing less than completely unsettling. Not only was she chased while walking her infant son in a stroller, but she was subject to a situation that can only be described as blatant blackmail when The Sun got its hands on a manuscript of one of her books. While Rowling admits that her phone was never hacked, she has shed light on how recklessly News Corp acts in pursuing information about its targets.

First, a little background on this inquiry and why J.K. Rowling and several other celebrities have become official witnesses. Back in July, it was revealed that the News Corp publication News of the World had hacked into the cell phone of missing teenager Milly Dowler. Existing voicemails of hers were deleted, giving her family hope that she was still alive and deleting the voicemails herself. She was not alive, and the police were misled by the tampered evidence. This caused many to ask who else the paper had hacked, if they had hacked, and that ignited a firestorm by several celebrities who came out claiming they’d been hacked. A major effort to investigate this activity was led by hacking victim Hugh Grant. Since he made his experience public, more celebrities came out saying that they’d been pursued by News Corp papers in a similarly intrusive fashion, including Sienna Miller, Piers Morgan, and Rowling. They agreed to testify before the Royal Courts of Justice.

Fast forward to last week, when Rowling gave her testimony and described an incident in which she and her children were chased by paparazzi:

“How I thought I was going to outrun a 20-something paparazzo while pushing a buggy…,” Rowling said. “My daughter was [saying], ‘Calm down Mum, calm down, don’t be silly, it doesn’t matter,’ but it mattered hugely to me that the moment I set foot outside the door, my children were being photographed again. So the cumulative effect, it becomes quite draining.”

But it gets worse; not only do the paparazzi chase Rowling, but the author said that a “journalist” approached her daughter and left a note in her bag — when she was five years old. Another “journalist” also contacted the headmaster of her daughter’s school, claiming that she was revealing details about the book that were “upsetting” to other children.

In addition to the incredibly aggressive pursuit of Rowling’s child, they went after her work, too. News Corp publication The Sun acquired a copy of one of her manuscripts after it was stolen from a printer’s office. The paper apparently wanted to turn the situation into some kind of photo-op, and Rowling was forced to take legal action to prevent the contents from going public.

And Rowling’s testimony is only a fraction of what’s being said about the practices of the British tabloid industry. While this is not an official trial (no one is being charged with anything yet) and just an official media ethics inquiry, it is exposing a lot of truly uncomfortable truths about the paparazzi.