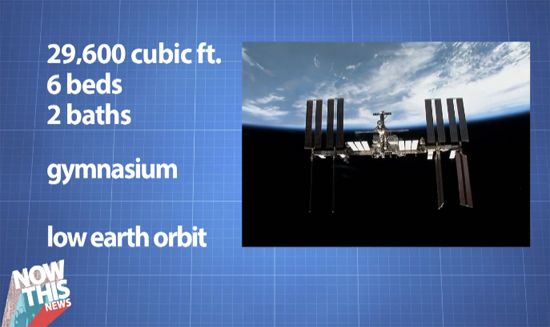 One of the things we ask ourselves on a disturbingly frequent basis is, “How could the International Space Station get any cooler?” Our typical conclusion on how to effectively up the coolness factor usually revolves around the cast of Firefly in some way, but that doesn’t mean we’re not open to other solutions. Specifically, NowThis News has reminded us that it’s easy to forget that the ISS also functions as a home for all those aboard. One could even say it’s a, ahem, “crib” of sorts. Okay, yes, there’s a video of the International Space Station edited in the style of MTV Cribs, and it’s great.

The video’s actually of Sunita Williams, commander of Expedition 33, giving a guided tour of the International Space Station. It’s the cuts and sound effects that really make it feel like a lost episode of MTV Cribs more than anything. It could have easily been entirely obnoxious, considering that’s how MTV Cribs episodes tended to turn out, but it manages to borrow just enough without going overboard.

Even if you’re not a fan of MTV Cribs, it’s always nice to take a look at the inside of the International Space Station. If you’re really pressed for time, skip to the two minute mark for the best part.