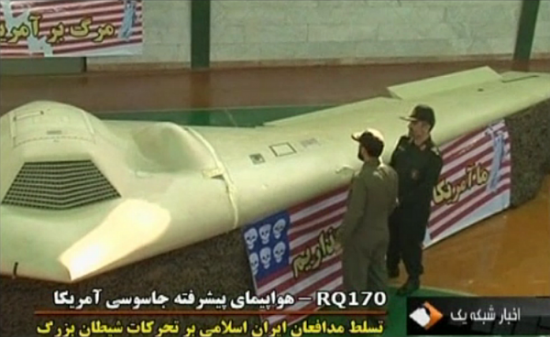 Back in December, members of the Iranian military announced that they had downed and captured U.S. RQ-170 drone flying in or near Iran’s airspace. Iranian officials went on to proclaim their intent to reverse-engineer the drone, and build their own version of the unmanned aerial vehicle. Now, it seems that they may have made some progress, as an Iranian military spokesman claims to have cracked the drone’s database.

According to the Fars News Agency, Revolutionary Guard aerospace chief General Amir Ali Hajizadeh revealed detailed information he claims could only have been gleaned from data found onboard the drone. Hajizadeh is quoted by the Associated Press as saying:

“this drone was in California on Oct. 16, 2010, for some technical work and was taken to Kandahar in Afghanistan on Nov. 18, 2010. It conducted flights there but apparently faced problems and (U.S. experts) were unable to fix it[.]”

Hajizadeh listed other events that were apparently recorded in the drone’s memory, including a sensor test at a Los Angeles facility in December 2010. According to Fars, Hajizadeh went on to claim that the drone had flown over Al-Qaeda leader Osama Bin Laden’s Pakistan compound two weeks before the building was raided and Bin Laden killed in May of last year.

At first it might seem extremely and implausibly odd that information about a previous mission — and especially so sensitive of one as the killing of Osama Bin Laden — would have remained within the drone’s memory months after the event. While maintenance information would be useful to whomever was servicing the drone, past misions seem like something of a liability. Though Hajizadeh did not address this point directly, he did is quoted by the AP as saying that Iranian experts had managed to recover information deleted from the drone’s memory.

There’s no denying that there is a high element of political theater in these proceedings, with Iran taking every opportunity to embarrass the U.S. government over the loss of the drone. With that in mind, it’s entirely possible that Iran is simply taking information that they have gleaned — the maintenance records of the aircraft — and have peppered it with invented facts. For instance, it’s been reported by the Atlantic that RQ-170 drones were involved in observations on Bin Laden’s compound before, during, and after the raid which killed the Al-Qaeda leader.

If the Iranian claims are true, and probably a handfull of people in the Pentagon know how true they are, it shows that further security measures may have to be taken to ensure that downed drones don’t give even this much information away. Though the information revealed by Hajizadeh appears to be of little real value, it is nonetheless embarrassing. What’s more, it shows Iranian mastery of sophisticated data recovery techniques.

Perhaps more disquieting than the factoids revealed by the Iranian military were claims by the Fars News Agency that Iran isn’t the only country interested in the drone. Though the AP says Iranian officials have denied it, Fars reports that China and Russia have expressed interest in the drone. This little bit of high-tech political theater could soon have some new players.