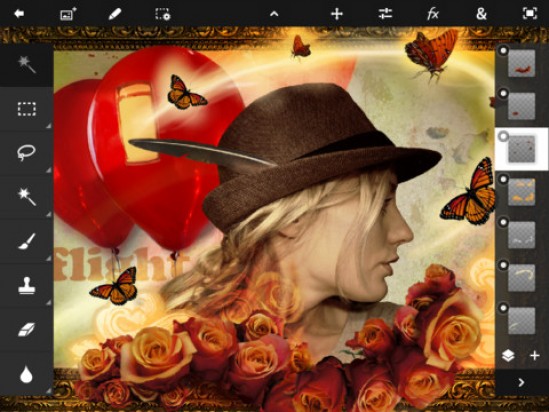 Image manipulation wizards rejoice! Adobe’s mobile Photoshop, Photoshop Touch, has now released on the iPad 2, for a paltry sum of $9.99. Your device has to be updated and running iOS 5, or else the app won’t be compatible. This version of Photoshop takes core features from its big brother and stuffs them into the tablet, so you can touch up pictures by adding aliens into the background on the go.

This release is the first of six tablet apps Adobe has been working on, and it certainly makes sense that Adobe would begin their assault on mobile with its flagship image manipulation software. Aside from missing certain features, users will have to familiarize themselves with a new user interface, something that already takes a bit of practice with the PC Photoshop.

There is already a Photoshop Express app, but this new Photoshop app provides more functionality, providing layers, a bevy of selection tools, filters, and filter brushes that users can apply to pictures pulled straight from their camera roll. The app allows users to share images via social networks, as one would expect anything to do nowadays, but it also allows users to upload the image to Adobe Creative Cloud, where you can retrieve it later and open it up in Photoshop CS5. Though, as a point of content amongst users, the output fille will only be of 1600 x 1600 resolution.

Photoshop Touch isn’t the only app Adobe is planning on releasing, as it’ll be leading the way for subsequent apps, like Collage for moodboards and Proto for website and mobile app prototyping. So, head on over to iTunes and pick up your very own Photoshop Touch if you have an iPad 2, and start shopping celebrities into pictures with you.