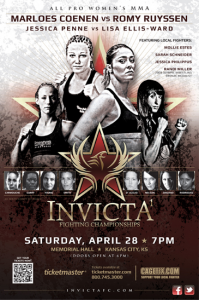 Yes, indeed, we at The Mary Sue do like to cover our athletic fighting ladies. But women’s MMA is still working on becoming as popular as men’s MMA, so we’re more than happy to lend a fist! And on that note, we’re even happier to tell you about Invicta Fighting Championships, the first-ever all-women’s MMA event that will be taking place at the end of this week and why you should give it a little bit of your time. Because, as Strikeforce Champion Ronda Rousey pointed out recently, it’s not just about the stars of women’s MMA — it’s about all the athletes. So, let’s find out more!

It’s undeniable that while women’s MMA has some notable breakout stars lately — including Rousey and the retired fighter-turned-action star Gina Carano — individuals do not necessarily provide the full recognition that the sport needs. Because women’s MMA is a sport, the women are skilled, trained, and competitive, and they deserve just as much attention as men’s MMA. (Which has its own struggles, to be clear, like how it still isn’t legal to hold a professional MMA event in the state of New York; previously, only amateur bouts were allowed.)

The Invicta event will turn a new page in the sport, featuring 11 bouts headlined by a rematch between former Strikeforce Champion Marloes Coenen and Romy Ruyssen. Back in 2008, Coenen defeated Ruyssen with a rear-naked choke — and now, they come back to add a little suspense to this groundbreaking event.

“I am honored to headline Invicta’s first fight card, and I am looking forward to earning another win over Romy,” Coenen stated in a release.

“Marloes is a great fighter, but she doesn’t quite have the ground game that I have. I am going to take her down and finish her,” Ruyssen said.

There will also be a “co-main event” between Jessica Penne and Lisa Ellis-Ward, the former of which hasn’t fought since 2010. The latter has suffered back-to-back losses in the Bellator Fighting Championships to Megumi Fujii and Jessica Aguilar. So, once again — can you feel the suspense yet? Here is the full dance card:

What Invicta will do is give women’s MMA its time in the spotlight to prove that an all-women event has as much clout and excitement as its men’s counterpart, to say nothing of opening up the field for even more women who are ready to become competitive fighters. Because wouldn’t you say, after reading about all the kickass women we cover, that women also kick an inordinate amount of ass?