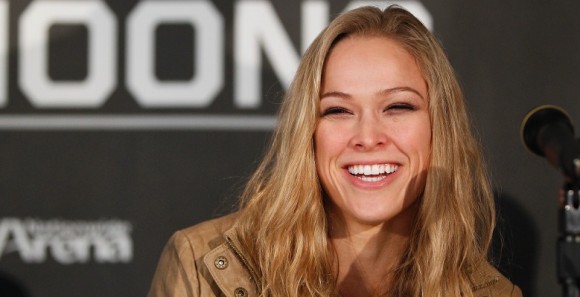 After making her professional debut last March, MMA fighter Ronda Rousey has now earned herself a Strikeforce title — in a matter of seconds. The prize money was also a nice bonus, considering her only reward for her amateur victories was, well, victory. And while she’s enjoying her rapid rise to the top of the women’s division of the sport and becoming better and better at what she does, she’s also finding herself in a role model position for other girls who might want to give athletics a try. But don’t go calling her the new face of women’s MMA just yet — Ronda Rousey kicks ass in the name of teamwork!

Rousey’s fights generally end very quickly — the total amount of time her amateur fights took before she won: 104 seconds — and using the same method: the armbar. It’s a classic judo technique, a very popular game-ending grappling hold that involves placing one’s legs across an opponent’s chest, with one of his or her arms pulled between the thighs, elbow joints against your hips. The opponent’s forearm is then pulled up to your chest, and then locked when you lean back and arch the hips. This causes some serious pressure to occur in the elbow joint, and the opponent is usually forced to tap out, ending the round. (Think of it as a more violent, ancient version of “crying uncle.”) But some people don’t tap out. Like Rousey’s opponent, former Strikeforce title holder Miesha Tate, who instead allowed her elbow to become dislocated. Ouch.

A fourth-degree black belt in judo, Rousey has been training in martial arts since she was a kid. When she was 17 years old, she qualified for the 2004 Olympics in Athens and became the youngest judo player to compete that year. The same year, she won a gold medal at the World Junior Judo Championships in Hungary. When she won a bronze medal in the 2008 Olympics, she became the first American ever to win a medal for judo. In short, Ronda Rousey is a very accomplished fighter.

And now that she has everyone’s attention, she’d happy to say that women’s MMA is gaining a lot of speed, but probably not enough for her liking.

“Our sport is still very much in its infancy but I only expect it to keep growing. It’s more of a struggle for women to get the same respect guys do in anything, be it sports or piano playing or comedy, in the business world.”

However, while she acknowledges that women have more obstacles to overcome than men do, she will not be wasting her time complaining about it:

“Everything takes more work if you’re a woman, but instead of whining about it I’m just going to do the work.”

Worth noting, Rousey is also known for her trash talk before matches, even sometimes credited with introducing it into women’s MMA. A very popular instance of this was to Cristiane “Cyborg” Santos (hey look! MMA fighters are geeks, too!), who beat none other than Gina Carano back in 2009, but with an asterisk: Santos later tested positive for steroids. Santos posted a picture of a beaten up Carano on Twitter as a reminder of her dubious “accomplishment,” and Rousey didn’t hold back:

Rousey believes that such talk enlivens the competition, despite it going against the rules of the sport that ask the athletes to have respect for each other in and out of the ring. But this particular fighter, whose mother was also a judo champion, thinks that when someone tries to act like the new face of women’s MMA (like Santos) or make the sport about a head-to-head battle between just two people, it takes away from “a pool of athletes” who all deserve attention.

That pool could also include girls like Rousey’s own younger sister, Julia, who is 14 years old and starting to dabble in athletics herself. However, the elder Rousey knows that for every time she curses someone out on TV, her sister might be watching and might get the wrong idea about how it works in the wide world of sports:

She does not, however, feel the need to encourage into pursuing fighting sports and getting “punched in the face like her big sister.” Julia is into soccer. Which is just as cool.