Interview: The Jurors of Oxygen's The Jury Speaks | The Mary Sue 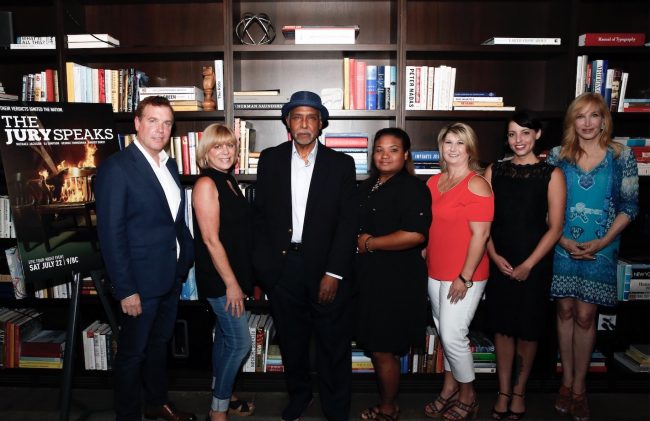 “I think it’s given me a lot of perspective in life.”

“It took everything from me.”

“It made me understand that I’m ok with being opinionated.”

These are a few of the responses from the jurors who told their stories on The Jury Speaks, an Oxygen special that aired last weekend about the juries behind famous trials. With a wide array of criminal cases and jurors from different walks of life, the impact of these high-profile cases was different for each person, yet they all fit together to form a more complete image of our justice system. Last week, I had the opportunity to talk to producer Nancy Glass about why this perspective is valuable. Talking to the jurors, they expressed similar sentiments about the double-edged sword that is the media and what they hope people will take away from their stories.

Robbie Nelson, who stands by her decision on The People vs. Robert Durst, says she trusted Oxygen because “all the other news outlets that had ever asked us to do interviews we’ve always had to be on the defensive, we’re always having to defend what we said. So when they came in and said, ‘We really want to tell the jury’s side of everything’ I think that’s really what changed it. I was really hesitant at first to do it—but then I decided, no it’s time. Let’s get our side out.”

Pauline Coccoz of The People vs. Michael Jackson, who is a mother of three children echoes this, opening up about the paranoia she and the other jurors felt after deliberations. “Throughout the years I’ve turned down a lot of interviews because intuition has become a great thing for me. There’s certain times, certain people say certain questions and instantly you’re defense mechanism goes up…you choose your words very very carefully and when it came to Glass Entertainment I point blank asked them, ‘Are you wanting to hear what I have to say or is this your story?’ It was clearly said to me that they wanted to hear what I had to say. So I took a chance, I went with my gut instinct. I felt that they really wanted to hear what I have to say.”

Maddy Rivera, of The People vs. George Zimmerman, had perhaps the most reason to be cautious. After the case, Rivera lost her job, home family, and friends. When people found out where she lived, she was threatened and feared for herself and her children who were 8, 13, 16, and 17 at the time. Rivera’s case feels like the most raw, an open wound that became symbolic of a greater problem within the United States. She felt safe telling her story to Oxygen because she had seen how detailed their other shows were, explaining:

“I grew a bond with the production and the person that spoke to me. As long as I’ve been here, they haven’t twisted my words. That’s my fear, I’ll say something and they’ll switch it up and it’ll say something else. But I trust them a lot and with this opportunity allowing me to be me, not having to lie and say, ‘this is what really happened, this is not what happened’ and they gave me the platform for it. How would I not trust a person who’s actually trying to listen to me, not what everybody else is saying?”

The caution of choosing words carefully is evident during our conversations. Rivera is quick to correct herself at a few points, and it echoes the producer’s statement that this perspective is one that’s often filtered, judged, or completely absent.

As I wrote about in my interview with Glass, the power of The Jury Speaks is that it moves away from individualistic blame and instead focuses on the format of the justice system as a whole. Nelson says she hopes people understand “there’s a tiny line that you’re given. Instructions on what you’re supposed to judge them on and how you’re supposed to judge them and you have to look at that because you want to stay within the law.” She elaborates, “If some of that law wasn’t there then there’s a lot of things that would change on all kinds of verdicts, not just ours.” These high profile cases might be milestones, catalysts for movements, and gripping, but they also gesture to the countless cases that may have just as much crime with none of the media attention or retrospective scrutiny. Not everyone get a highly acclaimed documentary series like The Jinx to deliver accountability.

“I really think it is the justice system because finding someone guilty or innocent really doesn’t mean that they aren’t guilty or that they were innocent. It’s based on the facts of what the prosecution tells you and what the defense presents. So, you have to still hear both sides of that story and like everyone says, there’s always three sides of every story.

Soon as we got done with the trial, friend and family were like, ‘How did you not convict him? He was guilty! He dismembered the body, how are you not finding him guilty?’ And then I had to tell them, we were specifically told that we can not use that part of the case. ‘But why?’ I don’t know why! That’s what we were given. I think every trial, there’s so much information given that then there’s only a little part of it that you actually have to listen to. So that’s the hard part.” Nelson was told that the dismemberment would be taken care of at a different point, though it never went to trial.

Coccoz speaks most positively about her case. As an analytical person who prides herself on being able to look at both sides and identify facts, she says, “I kind of felt that maybe this was my mission in life, was to be there and to hear all the facts and make an educated decision. And somebody’s life was in my hands….I do feel that it changed my life because it made me understand that I’m ok with being opinionated as a woman. As we get older it seems we become more and more opinionated but it’s ok, because we are confident and it makes us feel like our voice matters.”

She found herself “deeply saddened” by Jackson’s death. Coccoz adds, “I hope to never have to be in that jury position again, but I guess maybe that was something I had to go through.

Rivera calls her case “delicate,” and says she wasn’t expecting the case to have the impact it did.” After that situation, it brought Black Lives Matters and as African-Americans they felt like no one was listening to them and people were just able to shoot anybody and just do what they wanted to do,” she says. Rivera wasn’t permitted to look at the 911 call or when Zimmerman followed Martin. She laments about the prosecution, “Trayvon Martin never had a chance.”

“We didn’t make the decision, the decision was made so you follow what the law says and I did my job. And no one knew that after I did my job that it was going to come out to be more of an impact, more hurt…It was 5, 6 women and we followed what the law said. The law stated we couldn’t look at certain parts, there was a lot of evidence put to the side so we had to follow that.”

She confesses, “a lot of times I felt like I was manipulated because I didn’t know the law. I hate to say it didn’t happen—it might have happened, but because I am here now, I’m trying to make a difference.”

“The system fails in communication. They’ll tell you what a manslaughter is, they’ll tell you what murder is, but a person like myself who doesn’t read the law books and don’t know anything about that, it’s hard for you to have to make that choice.” On what she hopes people take away from her story, she says, “I would want someone else, whoever else is involved in jury duty, to speak up when they want to say something. I didn’t speak up. I was one of those that really let everyone else speak for me.” The mother of eight is currently preparing to become and teacher and working on outreach programs for youths.

You can watch episodes of They Jury Speaks on Oxygen here.