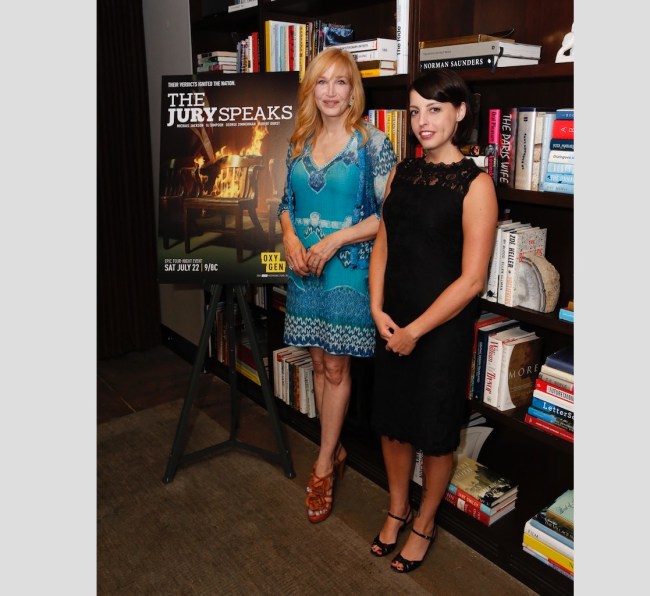 Oxygen has rebranded itself as a the crime destination network, and with a new show The Jury Speaks, they’re looking at famous and iconic crime cases from a different lens. Going beyond a classic re-telling of cases like that of O.J. Simpson, Robert Durst, George Zimmerman and Michael Jackson, the show looks specifically at the jury of these cases to illustrate what went into their judgement.

At an event for the show, I spoke to multiple-Emmy award-winning executive producer Nancy Glass about what she hopes The Jury Speaks will bring to our understanding of these cases and the justice system as a whole. Glass wanted to give a platform to jurors who she felt were often themselves misjudged or misunderstood in these high profile cases.

Many of these stories are ones we feel like we already know, whether it’s because of the overwhelming amount of press we saw around them when they were happening, or because of highly-acclaimed documentaries that came out of these cases. However, Glass felt that these jurors were too-often being approached with biases, and wanted a show that looked at the average people doing their civic duty, who found themselves in national headlines.

That’s not to say this is a show that’s trying to change opinions about these cases, Glass points out, but she hopes it will give new light to “how the crime was in fact judged, not how we judged it.” The power of the true crime genre and shows like this is they often identify systematic failures instead of individual blame, and illuminate ways the system can allow some of these figures to be judged as not guilty. “In so many ways the system is faulty,” Glass says, “A judge can give bad instructions, a prosecutor can promise something that they cannot deliver, they can call on witnesses that just don’t have credibility for the jury.” I’ve written in the past about how I feel these shows provide a sense of justice and accountability towards systems that are often discriminatory, inaccessible, or manipulative.

That was the case with many of these juryies, from Maddy Rivera, the only non-white juror on the George Zimmerman case who talks about only being given very narrow instructions and often feeling confused or Robbie Nelson, who says that she wasn’t allowed to use the information that Robert Durst dismembered the body in her decision.

In this show, Oxygen leaves judgement ultimately to the viewer, while also giving the jurors an opportunity to revisit their decision with the information that often came out after the case: evidence that was not allowed, the character of the defendants, etc. Some of these cases feel old, while others are very much open wounds for communities and people involved. A word that Glass uses often is “brave” to talk about the jurors, some of whom dealt with very real personal impacts as a result of their role. “Maddy, she had 8 kids,” she points out “Did you know she would take the food they gave her and she would take it home because she couldn’t make a living?”

In the O.J. Simpson case, she points out the jury was sequestered for 10 months. “They can’t see their families, they can’t see their friends, they can’t make a living. They’re living on meager nothing, basically,” she says, “they look at crime scene photos which are terrible, especially for someone who’s not used to that and they can’t even discuss it with each other. I knew that after months and months and months it was so stressful I mean Lon [Cryer] said he had a heart issue. It was so terrible for them and I thought people should know that’s what happened.”

“Imagine what it’s like when you’re doing your job and your following the instructions you’re given and a prosecutor calls you stupid in the press. And people threaten you and yell at you in the street or you lose your job over it,” says Glass. “That’s pretty terrible. Nobody goes up and says ‘I want to be a juror’—that’s not their ambition and it certainly isn’t their ambition to be famous. And suddenly they are.”

The wide array of cases and individuals means viewers may have very emotional reactions. This was definitely the case just from the small excerpt I saw. While the immediate anger and hurt that the public attach to these cases is absolutely understandable, especially when we feel that justice is lost, The Jury Speaks exists not to direct that hurt at these individuals but to understand the parameters they were given. As a result, we learn more about the dynamic of these often abstract spaces (at least, abstract for me as I’ve never been on a jury), and why these decisions ended up the way they did.