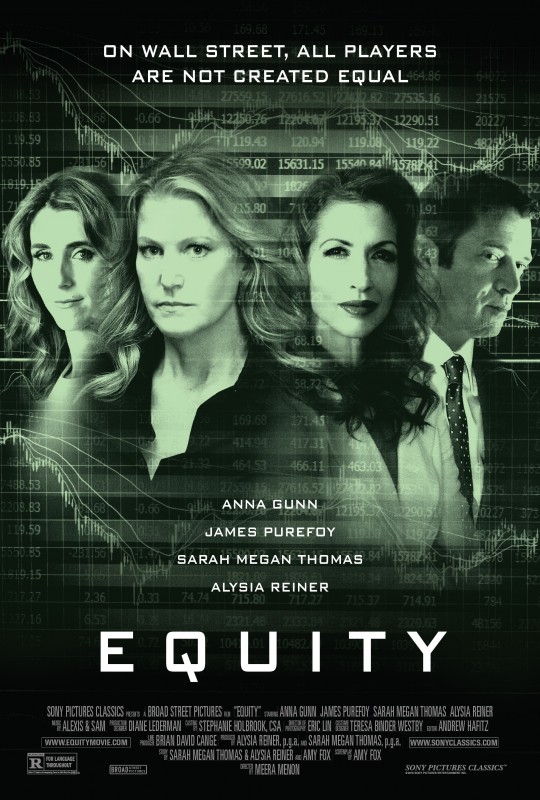 Most “Wall Street” films are as male-dominated as the industry they depict. So Orange is the New Black‘s Alysia Reiner and actress Sarah Megan Thomas teamed up with writer Amy Fox to create a female-centric Wall Street film that explores money and power from a female perspective. The film they ended up creating, Equity, stars Anna Gunn, Thomas as her younger protogee, and Reiner as the detective trying to ferret out corruption.

Here’s the official description of Equity from Sony Pictures Classics:

A female investment banker, fighting to rise to the top of the corporate ladder at a competitive Wall Street firm, navigates a controversial tech IPO in the post-financial crisis world, where loyalties are suspect, regulations are tight, but pressure to bring in “big money” remains high.

Directed by Meera Menon, Equity is unapologetic about presenting nuanced female characters, no matter how ambitious, cutthroat, or morally relativistic, and shows both the good and the bad in what it means to be a powerful woman in business. Check out this amazing clip from the film in which Anna Gunn’s Naomi, the investment banker, talks about what gets her up in the morning:

I had the chance to chat with Equity‘s director (Menon) and writer (Fox), and we talked about why we all need to get more comfortable seeing (and being) ambitious women.

Teresa Jusino (TMS): I’d love to hear about the decision to tell this story. Amy, I understand that Alysia and Sarah are also behind the story with you. How did this come together as a project, and as a script?

Amy Fox: Yeah. Alysia and Sarah came up with the concept of a female-driven Wall Street film, and I had worked with them in the past in theater. They approached me with the project, and it immediately resonated with me — the idea that Wall Street movies are so popular, but that there was this huge amount of untapped story that we haven’t yet seen, and that that didn’t make any sense, and that it was a terrific way to explore women in power and what that means.

TMS: Meera, how did you get involved?

Meera Menon: I joined the film basically during development. They were looking for a female director, that was part of their mandate, which I completely applaud. I knew an independent film producer in L.A. that Alysia knew, and he connected us, and I read the script and immediately fell in love with the tone, with the quality of the writing, and the ways in which I knew the actors would be able to play these scenes. Amy writes incredibly playable scenes, scenes where you can really sense what the game of each scene is. And I completely fell in love with the main character, Naomi. I thought she was a character I could learn a lot from in terms of her unapologetic embrace of ambition and money; two things I needed in my own life to start embracing in a more holistic way. And I was so on board from day one. I was just lucky they’d have me.

TMS: This film gave me a lot of food for thought. Because yes, a lot of it is about how women need to be more comfortable with ambition and this is the story of these women in a typically male-dominated field. But also there’s the negative side of that — and we see this in male-driven Wall Street films, too — there’s the older, more established player, and then there’s the younger upstart who’s trying to take over. But since these characters are women, that felt a little different to me, because there’s this sense that older women may have to guard their position more closely because the available slots are so few. What do you think the film has to say about both the positive and the negative aspects of what women have to go through in this industry?

Fox: I think that, for me, it’s a question of this being a high-stakes industry, and very competitive, with very few open slots at the top. It’s similar to the entertainment industry in that way. And those environments do not bring out the best in people! [laughs] But audiences love those environments, and we love watching people not at their best. What’s interesting is that it seems to be harder for us to enjoy watching women play those games with men. Maybe it’s because we haven’t seen enough stories [like this], but we always want the women to be their best selves. That’s what’s interesting to me is to put people in an environment of scarcity and really turn up the heat to see what it brings out in them. Dramatically-speaking, that’s what you want.

TMS: That behavior does seem to be more palatable in films like Wall Street, or The Wolf of Wall Street…or anything with Wall Street in the title. But yeah, in this movie we might be more likely to go “Women shouldn’t be acting like this.” Or even, “Women wouldn’t act like this.” It’s more unnerving to see somehow.

Menon: Another quick comparison we’ve heard. I’ve heard a couple of audience members ask whether there was any reference to All About Eve, and I think that’s probably been one of the only other movies — aside from maybe UnReal, which is on television right now and is also trafficking in the same ideas we are in this movie All About Eve might be the only other example of the kind of dynamic between women, but that’s still based in show business and vanity, and not been in this professional sphere of ambition and money and professionalism. But it’s interesting that [All About Eve] is the only point of comparison that people often have. 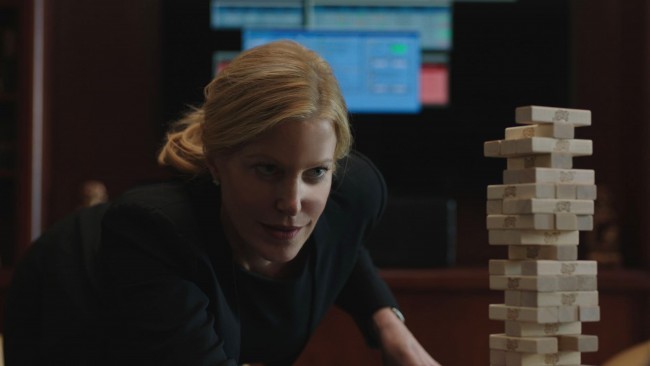 TMS: I’m a huge fan of Anna Gunn’s work, and she’s great in this film. I’d love to hear about how she got involved with the film, and what was the decision-making process like surrounding casting Naomi?

Menon: We were just looking for someone who understood the role in the way we were lucky enough that Anna did. We were lucky that it landed on her desk, and that she read it and responded to it. You kinda just take your shots and hope for the best when you work with someone like her, because she’s very selective of the material that she does post-Breaking Bad, and we were really fortunate that she read it.

And I had a feeling that someone like Anna, having as much integrity as an actor as she does, I had a feeling she would respond to a script like this. The character as written on the page is unlike any role available to an actress like her out there. The drive of the character coupled with the vulnerability, and the fact that she really leads the charge and not reacting off of a man. That’s rare, I’m sure, in a lot of the material that comes across her desk. And so she was so excited by it almost instantly. When I met with her, she had pretty much an entire backstory outlined for this character and a total understanding of her depth when it came to who this person is and why she was pushed into the position she’s in when this movie starts. It was clear that it was in her DNA to play this role, and we were just lucky that she wanted to do it.

A lot of it has to do with her experience with Breaking Bad. She experienced seven years of playing a role that was a flashpoint for audiences, and she had really engaged with that dynamic. There was a perfection issue with Skylar. People either loved her or hated her. And I think in Naomi, she responded to the same issue.  That Naomi is in a situation she has no control over, but is being held accountable for.

TMS: Did anyone involved with the story have any experience in finance?

Fox: No, I did not, and I was intimidated at first. But I’m also a research nerd, so I took it as a challenge and I read everything. I spent the first three weeks of research just trying to understand the vocabulary, the basics of an IPO, what’s the difference between investment banking and trading, and I learned an awful lot!

TMS: What is the takeaway from this movie? What do you hope audiences go away thinking about?

Menon: I hope audiences walk away talking about what our perceptions are, culturally, about women and power and the way they wear ambition. It’s a particularly timely moment in which to be discussing that. We’re having the first female Presidential Candidate for a major party running for President. It’s the perfect time to be dissecting our attitudes around this.

Equity is out in theaters now from Sony Pictures Classics.