"I'd like readers to question, 'Who gets to be the one?'" 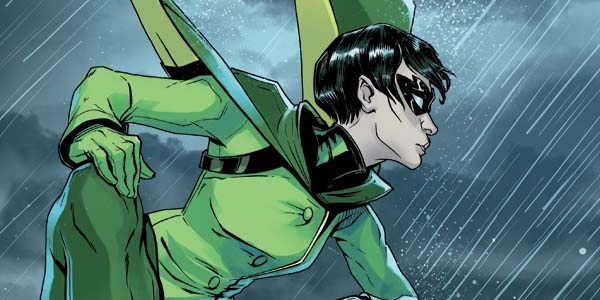 Dynamite Entertainment recently announced that Amy Chu, the writer behind numerous issues of Red Sonja and the Poison Ivy: Cycle of Life and Death miniseries, will be launching a brand-new Green Hornet series with artist
Germán Erramouspe. In this new series, Kato’s daughter Mulan will play a starring role as she and her father team up to protect Century City and the Green Hornet legacy.

The Mary Sue was able to chat with Chu over email about her vision for the series, and why she was so excited to write it.

“The Green Hornet was one of the top titles on my bucket list to write,” Chu said, “for so, so many reasons. Like Poison Ivy, the Green Hornet is one of those characters I feel hasn’t gotten the audience it deserves. Green Hornet is older than Batman and Superman, and it has the additional layer of appearing to be a public villain while doing good, which makes it very interesting and challenging to write.”

“I also want to write something that my parents can read and enjoy,” she said. “They come from a generation in Hong Kong who were huge fans of the TV show because of Bruce Lee as Kato.” Lee played Kato, the Green Hornet’s kung-fu expert valet, in the 1966–1967 Green Hornet television series on ABC, where he quickly became “the real star” of the show. Though The Green Hornet only lasted one season in the U.S., it became a massive hit in Hong Kong, where it was marketed as The Kato Show.

Historically, Kato has been a complicated example of Asian representation: prominent and heroic, but also often problematic or stereotypical. “I think just about every pop culture character has had issues,” Chu said, “but with Asian characters we’re still seeing some terrible tropes even today. Let’s just say, you’re not getting an fortune cookie dialogue in my comics. (Unless of, course, I’m trying to be ironic …)”

Chu’s series will find Kato teaming up with his equally skilled daughter Mulan. “Mulan is Kato’s semi-rebellious daughter,” Chu said, “and the martial arts badass I wish I was. Like her dad, she’s got a strong moral compass that keeps her centered. And while she loves her dad, they don’t always see eye to eye. And NO, she is not me. I’ve already started getting interview questions like that!”

Their working relationship as heroes, she explained, is “definitely a father/daughter relationship: typical in some ways, and non-typical in others, of course. Let’s just say they learn from each other as the story progresses.”

Green Hornet will also draw on both the pulp and noir origins of the property. “Think of it as more James Bond action-adventure than Raymond Chandler,” said Chu. “It’s not as much of a detective story in the way Poison Ivy was. There is some mystery, but it points to a deeper conspiracy.”

That said, Green Hornet will still draw on noir visuals. Artist Germán Erramouspe said, “Amy Chu proposed to me that we could make this version of Green Hornet with a noir style, something in the vein of Edward Hopper’s painting, Nighthawks. Hopper is one of my favorite artists … I can give Kato and the Green Hornet, two characters that I really enjoy and am really excited to draw, a somber feeling.”

“I’m a fan of the noir visual style,” Chu said, “but don’t expect any red-lipsticked damsels in distress or dragon ladies in this story … Social issues and social justice were issues back then, just as they are now. It’s just about updating the storylines and making it more global. The action is fun, but some of the topics of this arc are quite serious.”

And as far as that martial arts action is concerned, Chu and Erramouspe are having a ton of fun incorporating it. “There’s not too many comics where you get to feature real martial arts,” Chu said, “so I’m trying to work it in as much as I can in a legitimate way. I’ve been sending Germán YouTube videos of wushu world champion Jade Xu and clips from some of the best martial arts films. This is the fun part of my job.”

Of course, the most significant change in the new series is handing the Green Hornet mantle to an Asian woman who’s traditionally been treated like a sidekick. “It’s obviously a huge change to go from what we normally see as sidekick character to the main role,” Chu said. “Like The Last Jedi, I’d like readers to question, ‘Who gets to be the one?’ What does it mean to be The Green Hornet?”