After DC Made Eddie Berganza the Poison Ivy Editor, Amy Chu Added a Scene Where Ivy Kills a Sexual Predator

Ok now that I had that scotch, I admit I did do a thing, and if you only just figured it out the joke is on you https://t.co/RVS0HTt8NE

Amy Chu’s 2016 Poison Ivy: Cycle of Life and Death miniseries, with pencils from Clay Mann and Stephen Segovia, was the character’s first solo title in her fifty-year history. Chu was, as she told Women Write About Comics, “grateful to have the chance to write the character,” and especially so since “Poison Ivy was [her] first title ever.” She expected to work under the Batgroup, with Chris Conroy serving as her editor.

Then DC unexpectedly transferred her book to alleged serial harasser Eddie Berganza. “He wasn’t even supposed to be my editor,” she tweeted on November 10. “They transferred the book to him after I signed on and nobody bothered to tell me.”

Speaking with Women Write About Comics, Chu explained further: “I signed on with the understanding that Chris Conroy would likely be the editor under Mark Doyle, who I have infinite respect for. For someone to transfer the title outside of the Batgroup was surprising and never fully explained to this day.”

“I had been specifically warned by people within DC about Eddie,” she continued, “and then to find myself suddenly with his name on my first book was infuriating. Mind you I had very little interaction with him the entire time, but still…”

As a result of her anger about the change, she tweeted, “I altered the storyline a wee bit in issue #3 … I honestly thought I was going to get fired but I think no one noticed…”

In issue #3 of Poison Ivy: Cycle of Life and Death, one of Ivy’s coworkers tries to blackmail her into having sex with him, since he’s her only alibi for another murder. He’s already been a creep at work, calling her “babe” and being sexually inappropriate. 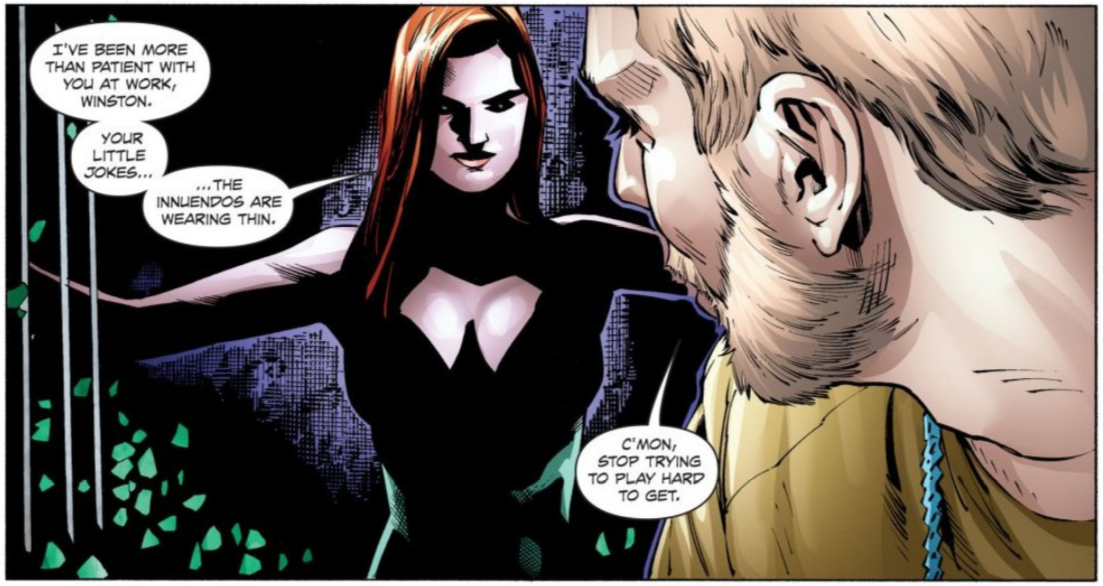 “Well, you asked for it,” Ivy answers. “Yes, I want you … dead.” She gives him one of her signature toxic kisses, and then feeds his body to her hungry, hungry plants.

While Chu tweeted above that she thought “no one noticed,” Rose Rosen over at Women Write About Comics did notice a discrepancy in DC’s approach to Poison Ivy. “With very little to no promotion, Amy Chu’s mini sold quite well compared to other similar books,” she observed. “Green Arrow, DC Bombshells, Gotham Academy, Injustice, and more sold significantly less than Poison Ivy and most of them got renewed for Rebirth or got a second chance at a mini, digital titles etc, or got expanded as franchises.” Meanwhile, “Amy Chu never got a chance to finish her story that ends on a cliffhanger. In fact, since then, she only got to write one Wonder Woman story for DC.”

(Via Women Write About Comics; image via DC Comics)