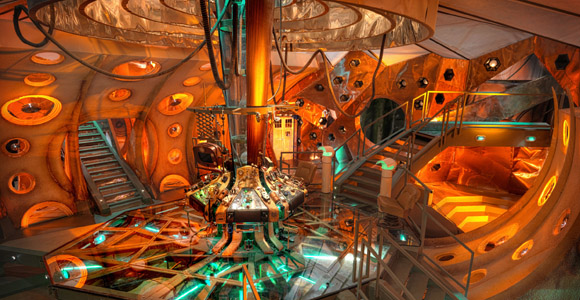 You know the saying – It’s bigger on the inside. So how come we’ve only seen a tiny fraction of the TARDIS in modern day Doctor Who? The simple answer is budget but it looks like they’ve found a way around that in the second half of Season 7.

An homage, of course, to Jules Verne’s Journey to the Center of the Earth but a pretty good indication we’ll be getting an adventure inside rather than outside the TARDIS. Doctor Who TV also pointed out executive producer Caroline Skinner had to stop Matt Smith from revealing to much about this particular topic at a recent interview session. They write, “Smith was answering a question about how big the inside of the TARDIS is and hinted this will be explored.”

Guest star for the episode, Ashley Walters, also gave away some info and was thusly scolded for it. First he tweeted an image of himself in costume.

I nearly got sacked on my first day because they’re really strict about it. I was in my costume lying down on the sofa and I just tweeted a photo with the word ‘space’ – I didn’t say anything else. Five minutes later I had execs knocking on my door saying, ‘what are you doing?’ And then I realised there were signs everywhere saying ‘don’t tweet.’

Then he told the Radio Times: “In our episode it’ll be the first time people get to see so much of the TARDIS.” DWTV says Walters is playing one of three brothers,the Van Baalens, an intergalactic salvage crew.

What are you hoping to see inside the TARDIS?