OK, But Why? Phantom Limb Sensation Induced in People With All Their Limbs [Video] 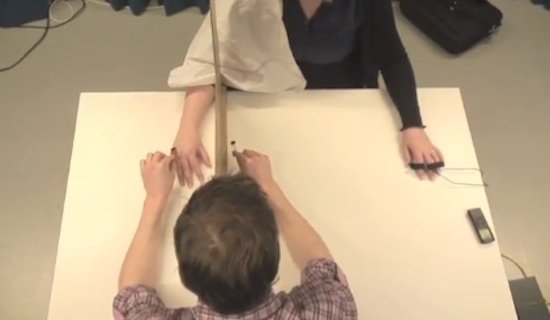 Today in Scientific Studies Sure To Make You Go ‘Huh’ we bring you the latest news from researchers at the Karolinska Institutet, who have succeeded in inducing phantom limb sensations that can make people feel like they have a third arm. After just a few minutes being exposed to an illusion — having their own arm, which they can’t see be stroked with a paintbrush while the air in front of them is stroked similarly — participants in the experiment were so invested in their new limb that their stress levels jumped when the fake hand was threatened with a very real knife. Which is just silly — everyone knows you can’t stab a phantom hand with a regular knife. You need a +1 or better weapon for that!

The Karolinska team conducted a series of experiments on 234 subjects researchers found they could not only induce the sensation of a phantom limb, but mess with people’s minds in all sorts of clever ways over it, from the knife attack described above to having people close their eyes and point to their left or right hand — a test that found many participants pointing at the phantom limb rather than their real one.

While it may seem strange to study a malady of amputees in non-amputees, researchers hope that the lessons they take in how to induce phantom limb sensation can teach them more about how the ill-understood sensation functions in the brain and one day help them treat what is a painful malady for many who suffer from it. You can learn more about the study in the interview with lead author Arvid Guterstam below.