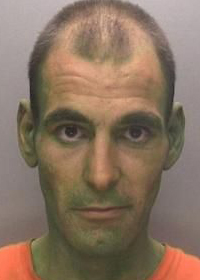 Scott Andersen was caught selling cocaine in Coventry, England. The reason why this isn’t a normal drugdealer story is because Andersen was painted green, posing as the Incredible Hulk. What’s weirder, when caught attempting to deal the drugs, Andersen claimed to be selling the drugs because, ever the shrewd shopper, he didn’t want them anymore and was trying to get his money back on his initial purchase of said drugs. As one wouldn’t be surprised to find out, Andersen was also drunk, and when arrested, was found to have marijuana on his person as well, which one can only assume he had because it’s green just like he was!

Because he’s the Incredible Hulk, you know?

Andersen sold cocaine to a fellow nightclubber as he was dressed as the Hulk, which, as Andersen’s own defense pointed out, couldn’t have made him more conspicuous. At his hearing, Andersen admitted to the charge of supplying cocaine, and to another charge of possessing marijuana. Defender Shane Crawford unintentionally humorously added, “This was a serious lapse on his part, a serious lapse and aside from the comedic element, his dress, he couldn’t have stood out more to police.”

So, if we learned anything today, it’s that drugs are bad, dealing drugs is bad, but dealing them as the Incredible Hulk is kind of hilarious, though bad.