You Won’t Like Bangladesh’s Hulk Knockoff When He’s Angry; Ever [Video] 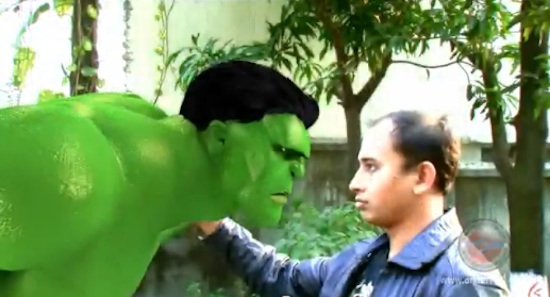 Not since Who Killed Captain Alex? have we seen such lunacy in a foreign film or elsewhere. Bangladesh’s HALKa PAGLA is a film about … well, we have no idea actually. Like Who Killed Captain Alex?, it prominently features terrible CGI fire and a terrible CGI helicopter; it ups the ante, however, with a terrible CGI tank, which I decree all film studies classes that cover HALKa PAGLA shall call “the bendy tank,” sunglasses which glow with CGI electricity, and, of course, an Incredible Hulk who can only be described with the picture above. In short, the trailer will melt your mind, but the film would probably bore you.