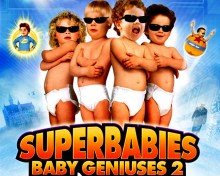 Scientists digging through data from a 1970 British Cohort Study that followed nearly 8,000 people over a span of decades have recently published a paper concerning their findings that high childhood IQ was linked to above-average self-reported drug use in adult life; kids with high IQs tend to do drugs as adults. The study, published in the Journal of Epidemiology and Community Health,  took much of the information collected by the Cohort Study, including socioeconomic status, levels of psychological distress, and found that the IQ-drug use parallels still existed even when controlling for these other variables.

Overall, the study found that by age 30, about 30% of men and 15% of women had at least smoked weed and about 9% of men and 4% of women had dabbled in cocaine. The pattern was pretty similar for most of the other drugs, in that when looking at the entire body of the study, illcit use of a given drug was around twice as common among the men as it was among the women.

The real fun starts when you factor in the childhood IQ. In that case, the scientists found that men who scored well on their IQ tests at age five were 50% more likely to have done amphetamines or ecstasy than similar men with lower IQs. The effects were even stronger with the women who, if they scored high on their IQ test at five, were nearly twice as likely to have used cocaine and cannabis by thirty than women who didn’t score as well. The IQ tests at age 10 only served to reinforce the relationship.

The results were still consistent even when subjects were controlled for self-reported adolescent anxiety, socioeconomic status, parental social status, and lifetime househould income. It just looks like the smart kids (at least the British ones) are picking up drugs later in life, but unfortunately, the study doesn’t shed any light on why. Of course, there are many obvious guesses to be made.

“Although most studies have suggested that higher child or adolescent IQ prompts the adoption of a healthy lifestyle as an adult, other studies have linked higher childhood IQ scores to excess alcohol intake and alcohol dependency in adulthood,” the authors write. And in addition, they point out that studies have shown the individuals with higher IQs not only seek out novel and stimulating experiences (like, hmmmm, maybe dropping acid) but also are particularly suseptable to boredom, which could cause them to turn to drugs as an escapist coping strategy.

Whatever the case, just don’t fall into the trap of thinking that just because you do a bunch of drugs it means you’re a brilliant but tortured soul, or that if you’re smart, you better start getting all these drugs crossed off the list before your thirty. Just hope that you don’t have any baby geniuses; they make for a mediocre movie in the short run, but they go and spend all the money on drugs.