Image Fulgurator Lets You Photobomb In The Coolest Way Possible 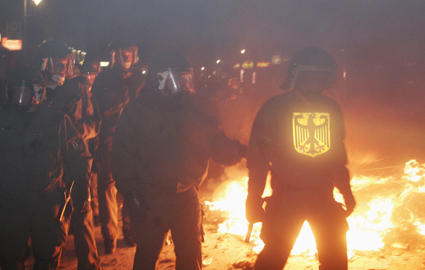 The Image Fulgurator, brainchild of one Julius von Bismark, is a device that is as cool as it is awesome. It does amazing things amazingly and gets me really excited. Also, it allows a user to photobomb other people’s pictures by essentially regurgitating an image onto the photographed object for the split second the photobombee is taking the picture. But I’m getting a little ahead of myself here.

So the way a traditional camera works is that light reflected off the object being photographed travels into the lens which projects it onto the film. Bam, a picture. Digital cameras don’t have film, but the principle is the same. The Image Fulgurator works the opposite way. You start with a picture and the Fulgurator uses its flash to project the light from the film onto the object being photographed via the lens. Basically a split second projection. An anti-photograph. If a camera sucks an image down onto film, Ghostbusters style, the Fulgurator pukes it back up. Now how does this all tie into photobombing?

Well, the Image Fulgurator has a built in flash sensing mechanism, meaning that it can detect nearby cameras right as they are taking their shot (so long as they’re using their flash). The end result is that the photographer winds up with a picture not of the object they intended to photograph but of the object they intended to photograph with the Fulgurator picture projected onto it. If they look at the object again the image isn’t there. The cherry on top? The Fulgurator looks practically identical to a normal camera. Absolute stealth.

The trolling potential for this is enormous, and Bismark’s website illustrates that pretty well. He’s got a series of pictures (mostly political) that show off the technology to a pretty righteous effect. Due to the nature of the process, the Fulgurator image literally glows on the subject for a split second, which allows for a really breathtaking illumination effect even when you aren’t using it for photobombing purposes. It’s a really simple, but awesome idea and I really wish I would have thought of it myself.

Relevant to my interests in graffiti, technology, and subversion