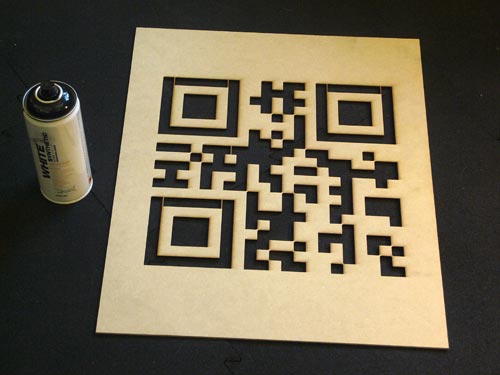 Using a couple of neat programs, laser cut stencils and a can of spray chalk, you can start a revolution and begin leaving QR hobo codes with secret messages for your smartphone-carrying brethren. If that sounds kind of cool, but doesn’t immediately make sense to you, here’s a little history. First off, hobo codes were glyphs originally used back in the pre-internet Stone Age as a way for hobos to communicate important information to each other, but not non-hobo squares like you (presumably) and me. One seemingly random symbol would mean “this underpass is a safe place to sleep” and another might mean “talk about religion here and get a free meal.”

This kind of communication eventually inspired a guy named Matt Jones to propose a thing called warchalking. Warchalking, a combination between hobo signs and wardriving (well, warwalking really) consisted of hobo code-esque chalk symbols that told travelers about things like insecure wifi networks. While QR hobo coding isn’t directly related to warchalking (as far as I can tell) it’s sort of a spiritual successor. QR hobo codes don’t necessarily pertain to tech information, but they’re inherently tech-y by virtue of being QR codes and they still have that “this is our little secret” vibe, while being common knowledge enough that they might catch on big time. But that’s enough of a history lesson. How do you make these things?

An in-depth step-by-step process is outlined over at Free Art & Technology (the brilliant minds behind the Media Artist Contingency Plan), but here’s the high-level process.

And that’s it. Pretty cool, right? Now, this isn’t the first time that graffiti has met technology, but it’s probably the most interesting way the two have been combined so far (and one of the few times it hasn’t involved LEDs). Even better, it’s (probably) not (very) illegal if you use spray chalk. I hope this catches on in that way that underground, hipster-y things do: common enough that it’s not a once-a-year occurrence but rare enough that it still feels like you’re in on a secret. Get your spray chalk, get out there and start marking up with world with helpful hints. In the meantime, I’m going to save up so I can finally get a smartphone.