Incredible: Speedrun of Super Mario Bros. as Projected on a Wall and Sidewalk 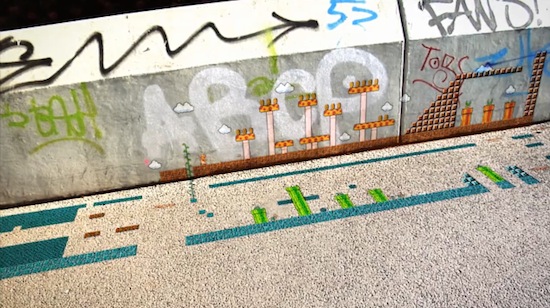 Super Mario-themed fan videos aren’t exactly a rare commodity on the Internet, but this one, you’ve just got to watch and admire: Vimeo user Surfap has posted a remarkable composited video of a Super Mario Bros. speedrun as projected on a sidewalk and a graffiti-covered wall. It keeps scrolling, and scrolling, and scrolling … seven minutes and a whole lot of wall and pavement later, Bowser is trounced and the Princess is rescued. The handling of the overworld-underground division is an especially nice effect.

A caveat: MetaFilter commenter JHarris has a few small bones to pick with the video’s fidelity to true Super Mario Bros. gameplay. “8-3 is supposed to have two sections with Hammer Bros. on ledges, not one, and when Mario reaches it one of them uncharacteristically leaps up then immediately back down onto the same ledge, which never happens in the game. Also, Bowser’s fire breath shouldn’t be in the area with the fish in the final castle. For some reason 1-2 is displayed on the wall, while 4-2 is inconsistently shown on the sidewalk. But, eh, it’s really not worth taking that seriously.” So: We might deduct a few points out of sticklerism, but that doesn’t diminish the broader accomplishment of craft, love, and geekery.