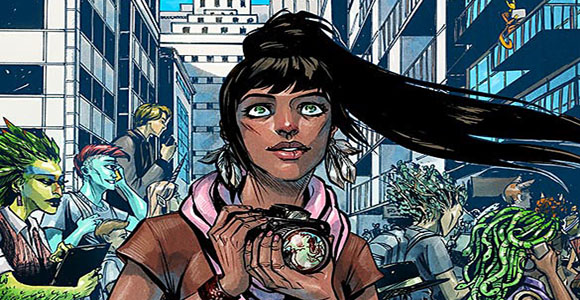 This Thursday marked arrival of the annual Image Expo, held by comics publisher Image in their home city of San Francisco to promote their upcoming books. The event — a comics-star-studded extravaganza of signings and announcements — is the only one of its kind in comics publishing, as most publishers continue to use standard comic conventions or the press to announce their new projects. The good news is that there are a lot of awesome-sounding projects coming up. The bad news is that (unsurprisingly) diversity is still a problem in comics.

Some of the interesting new books announced include Shutter, with a lead named Kate Kristopher described by Image as “a contemporary Indiana Jones.”  The featured image above is from the first cover of Shutter and you can see how gorgeous the art is. This ongoing fantasy-adventure comic is written by Joe Keatinge and drawn by Leila de Luca and it debuts in April 2014.  Another awesome-looking book announced this week is C.O.W.L. written by Kyle Higgins and Alec Siegel and drawn by Rod Reis, which is set in 1960s Chicago and features a superhero labor union called Chicago Organized Workers League that is having trouble with its public image and its place in the world.  C.O.W.L. debuts in May 2014. Kelly Sue DeConnick will be continuing her hit series Pretty Deadly and working on a new series called Bitch Planet with artist Valentine De Landro.  Bitch Planet is based on the campy women in prison trope of old but don’t worry, they’re well aware of the risks inherent in using such a trope:

DeConnick admitted the tricky dilemma she set up for herself in wanting to work with the Women in Prison trope but still honor feminism. “I have a profound and abiding love for exploitation films, but as a feminist, I also find many (if not most) of them deeply problematic—for reasons that are both obvious and that I can’t expound on without sounding like an academic paper,” said DeConnick. “These are two WILDLY mixed feelings. And I love mixed feelings. It happens that mixed feelings are the perfect soil composition for fiction.”

The fantastic team behind Phonogram and Young Avengers, Kieron Gillen and Jamie McKelvie, is back at Image for a new book called The Wicked and The Divine. It’s set in a world where every 90 years 12 gods are reincarnated and live as superheroes and celebrities. Unsurprisingly, like any time Gillen and McKelvie team up, this book looks great. Image also announced many other series, including Airboy by James Robinson and Greg Hinckle; Casanova Vol. 4 by Matt Fraction, Fábio Moon, Gabriel Bá, and Michael Chabon; Low from Rick Remender and Greg Tocchini; Nameless from Grant Morrison and Chris Burnham; and Wytches from Scott Snyder and Jock.

This day of announcements was not without disappointment, however.  As Image welcomed to the stage the main creators from many of these new series, many people noticed something very important – the group on stage was primarily male and primarily white. While later announcements increased the number of people of color and women included in Image’s publishing program, at the end of the day there was still a pretty clear majority of white men working at Image.  This isn’t a problem limited to Image — it’s not even a problem limited to comics.  And it’s important to talk about the fact that there are amazingly talented women, people of color, and LGBTQ folks working for Image and for many other comics companies.  The problem is that comic companies continue to point to the submission process as the great decider.  Marvel and DC both refuse unsolicited submissions for legal reasons, which means that any new talent can only break in if asked or discovered by those companies.  A couple years ago, when DC was confronted about their few number of female creators in the New52 relaunch, Dan DiDio responded by demanding of a panel crowd “who should we hire?” and as I’ve often related, in my time at DC only one woman ever approached me for work while hundreds of men routinely emailed me.   But those companies don’t have the most sterling reputations when it comes to hiring women, people of color, or LGBTQ folks and that doesn’t encourage other non-white-males to attempt to work there.  On the other side, like many non-Marvel/DC publishers, Image doesn’t pursue creators; creators pursue Image via submissions, and Image often points to the submissions process as being one of the major causes of any lack of diversity. But as Vida points out here, submissions numbers don’t tell the whole story or excuse a lack of diversity. While that entire Vida piece is worth reading, this bit is especially relevant:

The suggestion that it’s fair and reasonable to publish work in the ratio that you receive work baffles me. Why? There aren’t any laws about this. The very editors who cry no quotas when the pie charts boldly declare the disparity then insist they’re tied to a quota system determined by their own slush piles. Look: if you’re an editor who’s happy publishing 80% men, 20% women, fine. Own it! You make the decisions, and the rest of us are welcome to critique or celebrate those decisions. Call you a badass rebel, call you a tool of the patriarchy, subscribe to your journal, or cancel a subscription. If you’re on the other hand disappointed by your ratio, blaming the submissions pool isn’t likely to improve the situation in any immediate, effective way. Unchain yourself from those submissions numbers, and you might find a more vital mode of editing.

While these companies might be making an effort already to increase the diversity of their creators and characters (see: Marvel’s new Ms. Marvel series), the work needs to be consistent and thoughtful in order for true change to occur.  And looking at some of the photos from Image Expo, we still have a long way to go.