Hooray! We'll never have to think about doing anything ever again!

Man, being on the Internet is too much work — it’s such a hassle to keep track of different social media websites, calendars, photo uploading services, and all the other stuff out there that you need a login for. Luckily, there’s if this then that (abbreviated to IFTTT) to connect up all your most-used sites to work in tandem with one another.  If you’re an IFTTT user with an iPhone, then hold onto your butts — your life is about to get a lot easier. Two years after first launching, IFTTT  finally has a mobile app for the iOS.

IFTTT uses different “channels,” its name for the different accounts you might have across websites, and turns them into “recipes” that follow an “if this, then that” format. For example, if you’re an Etsy fiend, and you want to know when one of your favorite shops has a new item, you might create this:

Which looks like this on the new app, in case you were wondering: 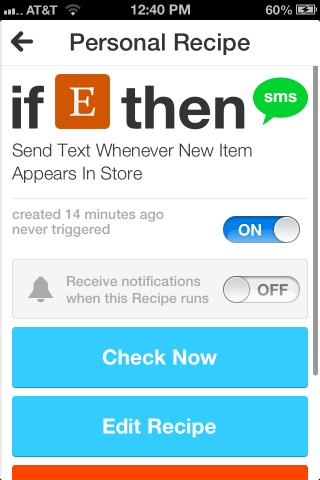 IFTTT even began a deal with Belkin last year, so you can program your WeMo remote to turn on the fans in your house when the temperature reaches a certain degree, and then create a separate recipe that sends you an email when that happens.

Now with the app in place, you’ll also be able to integrate your iOS contacts, photos, and reminders with all the other channels on the site. Want the pictures you take on your iPhone to save automatically to Dropbox? Now you can do that, too. Sweet.

The IFTTT team started with iPhones because that’s what most of them use in their everyday lives, but according to TechCrunch, they’re definitely interested in expanding to Android as well. For now, however, those that are not iPhone users will just have to settle for using the already amazing desktop IFTTT service.

(via Mashable, images via IFTT)