eBook App iFlow Reader to Shut Down at End of May; Blames Apple for Rule Change | The Mary Sue

eBook App iFlow Reader to Shut Down at End of May; Blames Apple for Rule Change 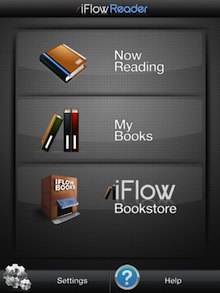 The team behind iOS-based eBook App iFlow Reader announced in a strongly worded post on their website that effective May 31st, the app would cease operations, as would the development company, BeamItDown Software. In addition to providing instructions to customers on how to migrate and protect books purchased through the app before then, the letter savagely criticizes Apple for “changing the rules in the middle of the game” and stifling innovation on the iOS platform when it doesn’t suit Apple’s ends.

The move by Apple that BeamItDown says doomed the app and the company: Instituting a controversial, mandatory 30% commission that Apple receives for all ebook sales, which, in conjunction with an Apple-imposed ‘agency model’ of bookselling that caps middlemen’s profits at 30%, necessarily makes third-party booksellers’ profits zero or less than zero. BeamItDown alleges that this was done to ensure that the Apple-owned iBooks app would have no real competition.

The key point here is that all sellers now get a 30% commission and Apple now wants a 30% fee, which is all of our gross margin and then some. The six largest publishers have now all adopted the agency model. These publishers account for nearly 90% of all ebooks sold.

Five of us spent nearly a year and a half of our lives and over a million dollars in cash and sweat equity developing the iFlowReader app with its unique AutoScrolling approach to reading that many of you really like. We think that our product is the best one available on iOS for reading ebooks. We had extensive plans to make it even better. We looked to the future of ebooks for inspiration while Apple and others were looking at the printed books of the past. This explains the cute, but gratuitous page turning animations, and old-timey bookshelves, which are all very amusing at first, but not very useful in the end.

We put our faith in Apple and they screwed us. This happened even though we went to great lengths to clear our plans with Apple because we did not want to make this substantial investment of time and money blindly. Apple’s response to our detailed inquiries was to tell us that our plans did not infringe their rules in any way, which was true at the time, but there is one little catch. Apple can change the rules at any time and they did. Sadly they must have known full well that they were going to do this. Apple’s iBooks was already in development when we talked to them and they certainly must have known that their future plans would doom us to failure no matter how good our product was. We never really had a chance.