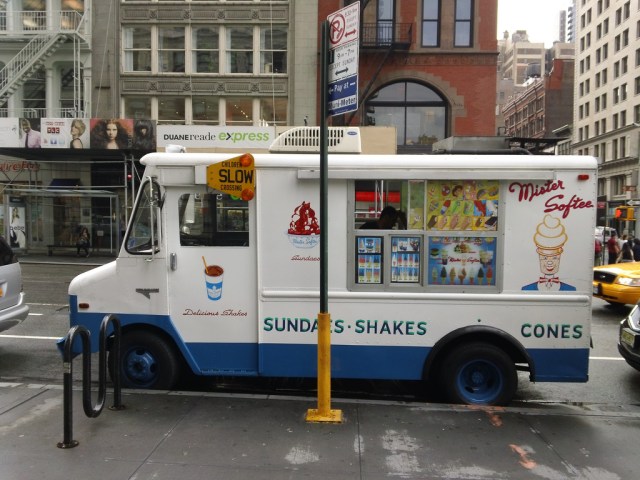 Gloversville, it turns out, is a “Sno Cone Joe” town, and Joe doesn’t take kindly to competition. Joshua Malatino and Amanda Scott, who live together in Gloversville, own several Sno Cone Joe ice cream trucks, and they don’t appear to take their business lightly. Police reports indicate that Scott and Malatino engaged in a pattern of harassment against the unnamed driver of a third truck, owned by rival company “Mr. Ding-A-Ling.” Since we don’t know the driver’s name, we’ll just refer to him as Mr. Ding-A-Ling, because really, when are we going to get the chance to do that again?

Scott and Malatino allegedly followed Mr. Ding-A-Ling around in their own trucks, blaring their music and offering free ice cream to customers to draw them away from Ding-A-Ling’s truck in an attempt to drive him out of business and corner the all important Gloversville, NY Mobile Ice Cream Market. As far as evil schemes go, it’s not exactly a weather machine, but it is still sleazy and illegal.

Police reports also state that at one point, Malatino shouted at Mr. Ding-A-Ling to the effect that “[Sno Cone Joe] controls the ice cream sales market in the city of Gloversville.” We unfortunately can’t show you footage of that interaction, but we have every reason to believe it looked exactly like this.

The most surprising thing here may be that the police got involved at all. We fully expected that beef between rival ice cream truck drivers would be settled at a sit down between both parties moderated by Mister Softee, the acknowledged Boss of Bosses of the ice cream truck business. After all, when you’re in a business this wholesome, it doesn’t pay to have arrests for stalking and harassment on your record.

Then again, maybe not. After all I would totally still buy ice cream from a criminal, because hey, it’s ice cream. If I need a cone, it doesn’t matter if the guy in the truck is Idi Amin, he’s gonna get my money in exchange for ice cream. That’s not a fact I’m proud of, but it’s a fact nonetheless.

(via The Daily Gazette)