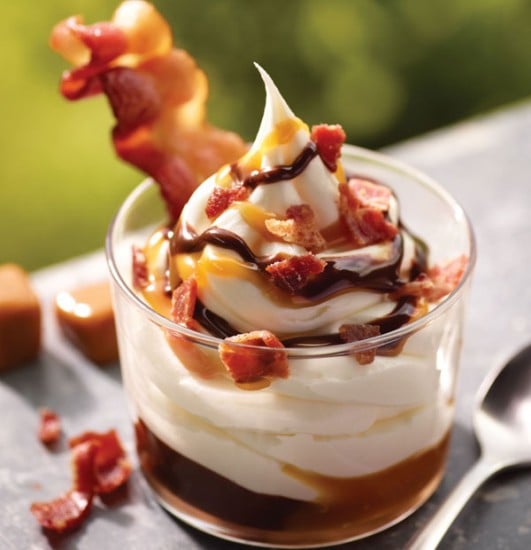 Among the pulled pork sandwich and sweet potato fries found on Burger King’s new limited edition summer menu, sits a simple, yet odd item one may have assumed would’ve never been put on offer at a national food chain: The bacon ice cream sundae.

The concoction is pretty simple, composed of Burger King’s standard soft serve vanilla ice cream, chocolate fudge, and caramel syrup. However, instead of sprinkles or gummy bears, the sundae is sprinkled with crumbles of bacon, then topped off with a thick strip of smoked bacon. For dipping.

The new menu’s tagline will be “Taste is King,” which, I mean, bacon crumbles and a dipping bacon strip for ice cream covered in chocolate fudge and caramel syrup will probably elicit some kind of strong taste, whether or not it is royal. For those that might be immediately put off by bacon on top of ice cream, the combination will most likely come down to salty and sweet, which as anyone who has ever had chocolate covered pretzels or chocolate chip cookies sprinkled with sea salt will know, is pretty darn good. The new sundae will probably be an exercise in overcoming initial expectations and not freaking out at meat covered in ice cream, rather than it actually having an acceptable taste.

The summer menu will only be around for three months, which, you know, is how long summer lasts, so that makes a bit of sense.