Carl’s Jr. is Testing a Pop-Tart Ice Cream Sandwich, So We Test Their Test by Making One 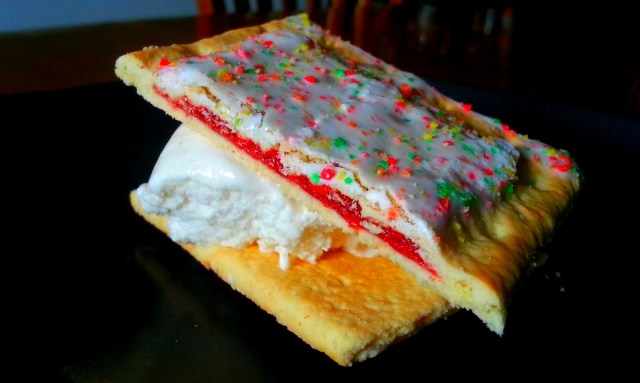 We used to live in a world where Pop-Tart ice cream sandwiches were not a thing, but thankfully Carl’s Jr. has taken it upon themselves to offer them as a menu option. It looks like right now the dessert is just being tested at a Newport Beach, California location, but since ice cream and Pop-Tarts are pretty easy to come by I made my own along with a video of my reaction.

A picture of one of the sandwiches in the wild has been making its way around Twitter, and it appears to just be vanilla ice cream sandwiched between two halves of a strawberry Pop-Tart. On my lunch break today I went to the store and bought those things, then came home and made myself a Pop-Tart ice cream sandwich. Then this happened:

The idea of a Pop-Tart ice cream sandwich sounded a lot better before I ate lunch than it does right now, but the S’mores flavor version really is at least a thousand percent better than the strawberry one. This is also the third weird dessert food I’ve eaten on camera for this job, so if someone could help me out and invent some kind of nerdy salad or something I can try so I don’t die of a heart attack I would really appreciate it.

(via Eater, image my own)