Ian McKellen Reveals That He Has Cancer (Don’t Panic!) 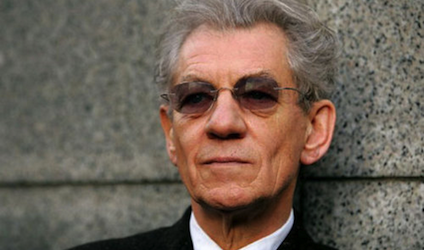 In an interview this week, Sir Ian McKellen, beloved by many geeks for his roles in both the Lord of the Rings and X-Men franchises (not to mention being, for this writer, the only bearable (not intended as a pun!) part of The Golden Compass), revealed that he has been living with prostate cancer for “six or seven years.” However, the actor says that his particular case is has remained non-life threatening and is being closely monitored.

“You do gulp when you hear the news. It’s like when you go for an HIV test, you go ‘arghhh is this the end of the road?'” he told the Daily Mirror:

Many, many men die from it but it’s one of the cancers that is totally treatable so I have ‘waitful watching’. I am examined regularly and it’s just contained, it’s not spreading. I’ve not had any treatment… You are told what the situation is: you can have an operation but there is no point me having an operation because there is no need for it. What they are concerned about is the cancer going to spread outside the prostate? If it doesn’t you are fine. How do you know if it is spreading? You keep being tested.

McKellen considers himself lucky that he decided to get checked out and insisted on a biopsy from his reluctant GP, which lead to the diagnosis. When asked generally about his health, he replied: “I just got hearing aids, I am going to have a cataract removed from my eyes, I am having an implant in my mouth, I am dealing with the prostate…I am absolutely fine thank you very much!” Jesting aside, he says he hasn’t found himself afflicted with the expected aches and pains of his seventy-three years yet, attributing his relatively fine health to regular exercise, modern medical advancements, and the National Health Service.

(The Mirror via Reuters.)