For Real This Time (We Think), Ian McKellen Talks on His Last Days of Filming as The Hobbit’s Gandalf 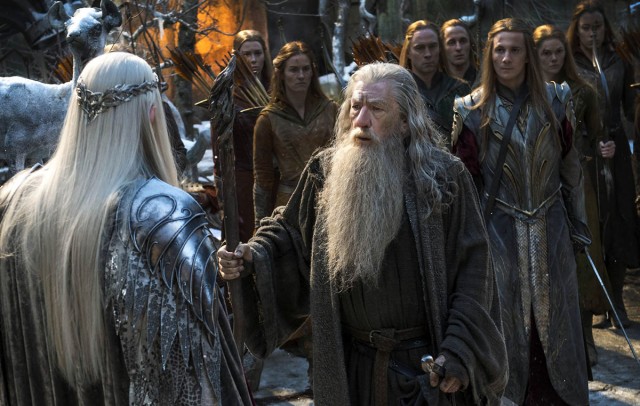 I mean, you just never know with this franchise, right?

HitFix has an account of what seems to be a group of reporters speaking with the actor on set of The Hobbit: The Battle of Five Armies on his second-to-last day of shooting. Back in 2012, McKellen had said this of the prospect of returning to Gandalf, “It was a little like going back to something that wasn’t necessarily going to be particularly challenging.” But go back he did and it seems he made the right decision for himself:

“I am happy,” he insists. “If you’re suggesting I mightn’t come back as Gandalf because the part wasn’t good enough, that wasn’t quite it. It was just a sense that I’d done it and at my age, each job might be your last. Did I want to be knocked out by an Orc forever more, when I could’ve been doing a play somewhere? In the end, there was no choice. He had to come back. I don’t think anybody refused. I was the beneficiary of dividing the plays into three, onto two because much of Gandalf’s story was well on its way to completion at the end of the original first film. There wasn’t much for him to do in part two. Now it’s all been split up, in the way it has, Gandalf’s shared over the three films in a way that is appropriate, I think, because he’s a major force. You can say that they’ve put in some new stuff. All the stuff that Gandalf has in this film was originated by Tolkien, in the appendices and elsewhere. So he knew where Gandalf had gone off to. He just didn’t put it into ‘The Hobbit.’

They also brought up the mood on set the last time a trilogy of Tolkien films was coming to a close:

“When we finished the other trilogy, it was a big day, the day you finished, for the principal actors. We’d finished shooting and they said this is the last day for whoever, everyone went away, the actor got changed, and everyone came back. People didn’t go home. They waited. And I remember my last day was out here in the car park, the battlements of something or other, Minas Tirith. And Peter, Barrie Osborne, the producer, stood up there and they showed a film all about me. Five, six, seven minute film, full of fun, jokes, moments you wanted to remember. And then you were called up and you were given your sword. Which I still have at home, of course. And there was torch light. You couldn’t help being moved by that. We’ll see if anything similar happens tomorrow. I suspect it will just be b’bye. “Bye-bye, Hobbit, bye-bye.” I don’t know. But yes, I should be very sad to say goodbye to some friends. But I sense that why won’t we be meeting up again in a few years’ time? We probably will. It’s possible, isn’t it?”

But to end this on a cute note, McKellen also briefly touched on his overall experience “on the job,” as is were. “I’ve been trying to find out how many times we’ve put on the nose and the wig and the beard and the staff. Nobody seems to know,” he said. “But somewhere in the records, it must be and I don’t know whether it’s in the thousands of days. It probably isn’t. It is a routine. I go to work, I get up, I come into work, I don’t live far away, it’s an easy drive.”

Sir Ian McKellenThe HobbitThe Hobbit: The Battle of the Five ArmiesThe Lord of the Rings