One Of These Men Might Be Finnick Odair In Catching Fire 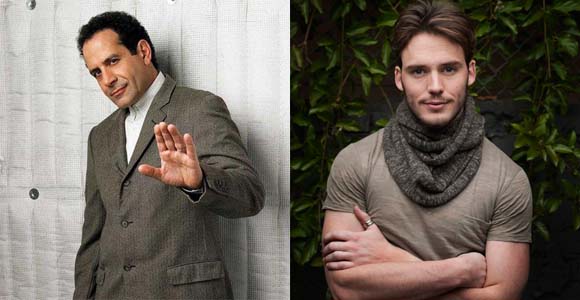 We’re sorry to do this to you again. A lot of names have been thrown around for the role of Finnick Odair in The Hunger Games: Catching Fire, and the District 4 tribute just might be the most anticipated new cast member in the entire film, but do we finally have the answer? Both of these men, Tony Shalhoub and Sam Claflin, are being courted for the Lionsgate film. Hit the jump to find out who they could be playing.

Previously, Armie Hammer and Garret Hedlund had both been attached to the role, as had Taylor Kitsch and Robert Pattinson (whose rumor got a lot of attention). Variety is now saying the studio is currently courting Snow White and the Huntsman actor Claflin for Finnick. You may (or may not) remember his work in Pirates of the Caribbean: On Stranger Tides as well.

“Lionsgate and all of the actors’ respective reps had no comment on the casting,” writes Variety. “Finnick was the most coveted available role in the Hunger Games sequel, and sources tell Variety that Claflin is nearing an offer.”

They use “actors” plural because also mentioned in the piece is the possibility of Monk star Shalhoub landing a role. Which one?

I know, right?! For those not familiar, Beetee (nicknamed Volts) is a tribute from District 3 who’s an expert in electronics and wiring. He’s a bit of a nervous/twitchy guy and is close friends with fellow District 3 tribute Wiress. We just found out yesterday actress Amanda Plummer will take on that role. I really hope Shalhoub does get the job because seeing him finish Plummer’s sentences seems absolutely perfect in my mind.

Variety also wrote, “[The Fighter’s] Melissa Leo had been on the shortlist to play Mags but her reps were informed Tuesday afternoon that she is not getting the part.”

What are your thoughts on the potential casting news?