We’re All Genetic Mistakes, But It’s Okay, At Least We Have Backbones 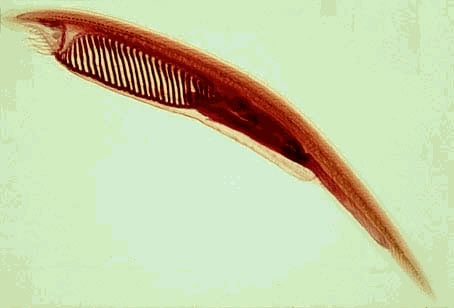 Apparently, we were supposed to be spineless invertebrates like this lancelet, but a couple of mistakes happened some 500 million years ago, so we ended up humans instead. Overall, this seems like a good thing. Being a lancelet-like creature doesn’t sound like too much fun. Plus, you know, the whole backbone thing.

Carol MacKintosh, a professor in the College of Life Sciences at the University of Dundee explained to Discovery News:

Organisms that reproduce sexually usually have two copies of their entire genome, one inherited from each of the two parents. What happened over 500 million years ago is that this process ‘went wrong’ in an invertebrate animal, which somehow inherited twice the usual number of genes. In a later generation, the fault recurred, doubling the number of copies of each gene once again.

MacKintosh said they don’t know what first carried the ‘mistake,’ but gene sequencing did show that the lancelet is most similar to the spineless organism before all the DNA doublings. The researchers said the genome duplication improved cellular communication systems, since the multiple inherited proteins can pick up more growth factor instructions than a single protein.

MacKintosh and team are now researching the protein families responsible for melanoma and neurological disorders. Hopefully, this knowledge of ancient genetic accidents will help in figuring out how diseases work.