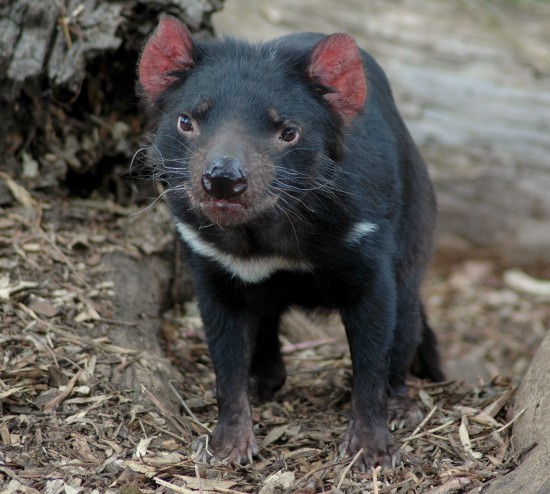 Researchers have sequenced the genome of the Tasmanian devil, an endangered species whose population is being decimated by a catchable cancer. This type of cancer is called Devil Facial Tumor Disease (DFTD) and is transmitted through the population when the animals come into contact with affected individuals. The genome sequencing effort took a unique two-pronged species-preservation approach based on analyzing the whole-genomes of two Tasmanian devils and applying the data collected to the genetic history of the species.

The data obtained from the genome sequencing effort was used to create a theoretical model to predict which individuals in the species should be kept in captivity to maximize the genetic diversity of healthy individuals, thus preserving the species for the future. The research will be used for at least one possible action plan for how to prevent the extinction of the Tasmanian devil, and could be applied to other endangered species. 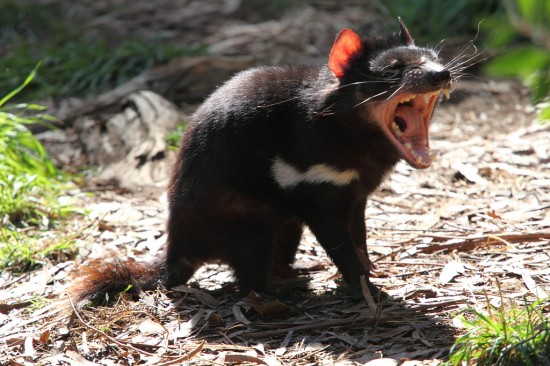 The Tasmanian devil is a marsupial found exclusively in the wild on the Australian island-state of Tasmania. DFTD disfigures its victims and causes death from starvation and/or suffocation in a matter of months. This unusual cancer was first noticed on the east coast of Tasmania just 15 years ago, and has since spread rapidly. Unlike any cancer in humans or other animals, DFTD seems to act like a virus but is actually spread by a whole cancerous cell. This cell is transferred directly from one individual to another through biting, mating, and even just touching. The effect on the Tasmanian devil population is comparable to what would happen if cancer in humans could be passed by a handshake.

To preserve the Tasmanian devil population, healthy individuals are being kept in zoos and other facilities in a type of protective custody. The plan was that when the tumor ran its course in the wild, the captive animals could be released into their former range and repopulate the areas. But this plan has a flaw. Just scooping up random individuals for protection doesn’t mean the best candidates for repopulating the species are being saved.

The research effort to sequence the Tasmanian devil genome was led by Stephan Schuster, a professor of biochemistry and molecular biology at Penn State University; Webb Miller, a professor of biology and computer science and engineering at Penn State University; and Vanessa Hayes of the Venter Institute. The researchers felt that there had to be a better way to determine which Tasmanian devil individuals would be the best candidates for protective custody, so they decided to conduct a genetic analysis by sequencing the Tasmanian devil genome.

The team of researchers approached the problem of how to best preserve the Tasmanian devil population two ways. The first way was to sequence the complete genomes (3.2 billion base pairs each) of two individual Tasmanian devils. A male named Cedricwho was resistant to two strains of DFTD, but eventually succumbed to a third strain, and a female named Spirit who contracted the cancer in the wild were the subjects of the sequencing effort. The researchers also sequenced one of Spirit’s tumors. Cedric and Spirit lived in two extreme regions of Tasmania, thus they represented the maximum geographical range of the species and served as a good measure of genetic diversity.

The second way that the researchers approached the project was to determine how much genetic diversity has been lost in the Tasmanian devil population since Tasmania was settled in 1803. This required an analysis of a large number of genetic markers from an additional 175 Tasmanian devils, some of which were preserved museum specimens from the Smithsonian in Washington, D.C. and the Natural History Museum in London. According to the researchers, this approach to genomic analysis, called “museomics,” has a lot of potential. The scientists learned that the genomic diversity of the Tasmanian devil, while low, has not decreased much over the last century. This means that DFTD is not to blame for the lack of diversity in the Tasmanian devil population because the disease only arose 15 years ago.

The researchers used the genomic data from the animals in addition to what they learned about the history of genetic diversity of the species to create a model to determine which individuals should be chosen for captive breeding programs. According to the researchers, the best way to preserve the species genetically is a little counterintuitive. It would seem that the best way to ensure the survival of the species would be to breed individuals who have a natural resistance to the cancer. However, the Tasmanian devil population has a low level of genetic diversity as it is, therefore choosing individuals from a tiny set of the gene pool would be detrimental.

The researchers hope that their two-pronged novel strategy for addressing the impending extinction of an endangered species will be applied to other species in jeopardy. The results of the Tasmanian devil study were published in the journal Proceedings of the National Academy of Sciences.

(Physorg.com via The Tasmanian Devil Project Photos via Wikimedia Commons)