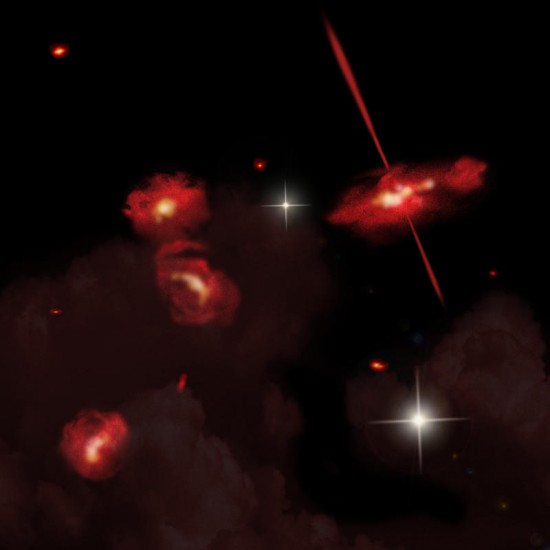 Astronomers have discovered a strange new “species,” so to speak, of galaxy. Using the Spitzer Space Telescope, NASA astronomers discovered four of these ultra-red galaxies. Though they are able to describe the members of this type of galaxy, they are unable to explain what makes them so red in color.

The Spitzer Space Telescope was able to find the galaxies, as opposed to Hubble, because Spitzer is sensitive to infrared light, which happens to be exactly the kind of light emanating from these new galaxies. In fact, these new galaxies are 60 times brighter in the infrared than they are at the utmost red that Hubble can even detect.

There are a few reasons why a galaxy would be so red. The two simpler reasons are that either the galaxy may be very dusty, or it may contain a bunch of old, red stars. The more complex reason is that the galaxy may be very distant, and the expansion of the universe stretches the light of the galaxies to longer wavelengths, thus creating redder colors, known as a redshift. Rather than just one of the reasons, these newly discovered galaxies, all of which are grouped near each other, seem to be so red due to all three.

Giovanni Fazio, coauthor of the paper in which these findings were announced, states that these new galaxies “might be a ‘missing link’ in galactic evolution.”

“Hubble has shown us some of the first protogalaxies that formed, but nothing that looks like this. In a sense, these galaxies might be a ‘missing link’ in galactic evolution.”

Next on the docket, the researchers aim to measure an accurate redshift of the galaxies, as well as search for other galaxies like these, for which they claim evidence points to their existence.