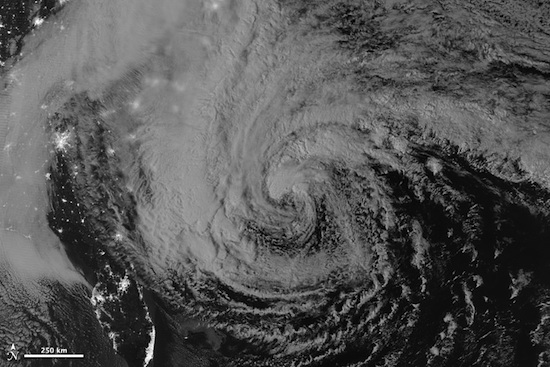 For plenty of us, watching Hurricane Sandy’s progression is no big deal — just look out the window. Even in New York, where the Frankenstorm hasn’t hit with its full force yet, it looks really hurricane-ish outside right now. We know that folks in the rest of the country may want to watch the storm’s progression in real time, too, though, whether to keep an eye on loved ones (hi, Geekosystem Moms, we’re fine!) or just rubberneck what’s shaping up to be one pretty serious piece of weather. No judgment here — it’s hard to hear that something might turn into an ice-hurricane and not want to see that. Here are some of the best tools available for monitoring the fall of civilization as we know it on the East Coast.

Google Crisis Map: For our money, this is the way to watch Sandy if you, like us, are in the thick of things and want to stay away from windows, which seems advisable today. Google’s Crisis Map tool tracks the storm in real time with constantly updating forecasts for where it will go next, but it’s not just about weather. Crisis Map will also show you where storm surges — one of the things that has meteorologists most worried about the storm — are most likely, as well as pointing you towards a shelter if you’re among the thousands of people who living in evacuation zones. It will even point you to weather observatory webcams and pinpoint new and pertinent YouTube videos from affected areas. You can also turn widgets off and on with just a click, giving you a customized map that’s as simple — or as complex — as you want it to be. If you’re in New York, there’s a city map available just for you, too.

Weather Channel Hurricane Tracker: We’re literally not allowed to write this post without including a nod to The Weather Channel, without which we would always have to look outside to know what the weather was. Like a bunch of animals. The Weather Channel gives you a pretty clear picture of the path of the hurricane, including predictions for movements over the next couple of days, when it looks likely to turn into a mere tropical storm. Which I guess we have in the Northeast at the end of October now? Because climate change is not a thing, clearly.

National Hurricane Center: The Hurricane Center Map provided by the National Weather Service is not exactly on the high tech end of things, and is probably the least tech-savvy map available. It’s a great place to keep up-to-date on the many storm advisories as they’re being issued, though, so it has that going for it in a big way. On behalf of the hurricane, we would like to apologize to the hard-working folks at the NHC, whose lives are made much weirder and harder by stuff like this.

StormPulse: This subscription service is a pretty spendy tool for serious meteorology nerds and professionals. If you want to gawk at the storm in style and with a bunch of neat tools, though, you could do worse than this map and its many customizable toys and gadgets, which will even offer you insights into previous storms this season