Why We Name Storms, and Other Fun Storm-Naming Facts | The Mary Sue

Why We Name Storms, and Other Fun Storm-Naming Facts 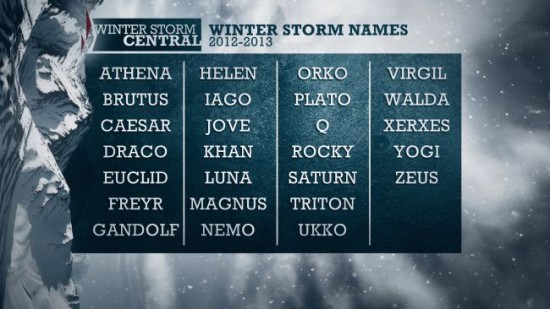 Not to show favoritism toward the force of nature that is the hurricane, The Weather Channel has decided that it will now begin naming winter storms as well. Though it is a little weird that we, the human race, find it normal that we give storms human names, simply looking at the inaugural list of available names makes us feel like someone at The Weather Channel plays an MMO or two. Though you might feel there is a solid theme of Greek and Roman naming conventions, it’s not exactly consistent, as “Q” is literally named after the New York City subway line. If you think that’s a weird namesake, we’ve gone ahead and plowed through some past hurricane names that we feel were a bit odd. As it turns out, the human race occasionally tends to name their weather systems like celebrities name their babies.

The Weather Channel isn’t naming the winter storms to drum up some kind of popularity on which it can then capitalize (so they imply), but they feel that if winter storms have a name, then it will raise awareness and thus keep people more prepared for a potential disaster. A noble endeavor, but when you start naming your storms after subway lines, maybe you need a better writer. If you’re wondering why hurricanes and winter storms get all the love, it’s because most other dangerous weather systems, like tornadoes, don’t last nearly as long, and thus one can’t really raise awareness by naming a cyclone that will wither away before word can spread.

The weirdest names from this winter storm list are, as we mentioned before, Q, named after the subway line in New York City, and most likely Gandolf, which isn’t a misspelling of everyone’s favorite wizard that isn’t Merlin, but a character from the 1896 novel The Well at the World’s End. A couple other odd choices are Walda, which is a name from Old German that means “ruler,” and Yogi, which is named after the people who do yoga, rather than the bear. You can pretend it was chosen because of the bear, though.

Why Do We Name Storms?

The National Hurricane Center employs logic, and notes that short names that are easy to remember help avoid confusion much more than using latitude-longitude identification methods. It also helps spread awareness and is much easier to track if your hurricane is named Igor, rather than a string of numbers.

Some of the first recorded hurricanes with names were named after the saint’s day on which the storm occurred. Author and forecaster Ivan R. Tannehill noted that before the end of the 19th century, an Australian meteorologist began giving hurricanes female names, and the practice eventually took hold amongst the Army and Navy during World War II. Eventually, in 1978, hurricanes began being named after both men and women, rather than simply sticking to the female-only naming convention.

Oddly, not the National Hurricane Center, but the World Meteorological Organization.

Contrary to what you may think, yes, actually, hurricane names can be repeated. There is a list of names that don’t repeat that cover a span of six years, at which point, names can be repeated on the seventh year. If a storm was deemed too deadly, such as Andrew or Katrina, then the name is removed from the repeating list and retired.

Actually, every hurricane that happens in the world isn’t named using one big list of names. The pool of names are separated into three lists, and chosen based on region. The regions are Atlantic, Eastern North Pacific, and Central North Pacific.

What Happens If There Are Too Many Hurricanes?

Each name list has 21 names. If we endure a particularly grueling hurricane season and experience more than 21 hurricanes, the fail-safe is such that the next hurricanes will be named after the Greek alphabet. There does not seem to be a fail-safe for if we then run out of the Greek alphabet, but if that’s the case, we have much bigger problems to deal with than coming up with names.

Why Weren’t Winter Storms Named Before?

We know a blizzard can cause an enormous amount of destruction, and we know they’re able to be tracked more than a one-and-done tornado can be, so why haven’t winter storms been named before? Most likely the reason, there’s no type of national center for winter storms, like hurricanes have the National Hurricane Center. Yes, it’s a little odd that a cable network has taken it upon themselves to be the official, central location for naming winter storms, but to be fair, anyone that has been unexpectedly snowed in has probably been waiting for some kind of campaign to raise awareness.

Why All the Unusual Names?

The Weather Channel did not actually say much about this, and instead just tossed a list out into the public. One may assume that less usual names are easier to remember. This, however, would be in direct conflict with the “easy names” given to hurricanes for the exact same reasons of being easy to remember. Perhaps The Weather Channel wanted to use names that wouldn’t overlap with ones used for and given to hurricanes.

But Has the Internet Made Jokes Yet?

What are you, kidding? Of course it has!

So, what do you think? Should we be naming winter storms, or better yet, should a cable network be the sole entity in charge of that? Should we take a cue from Titan A.E. and name our storms after the most common names possible, or should we make them more unique and hope that they’ll stand out?