By actually having some, first of all. 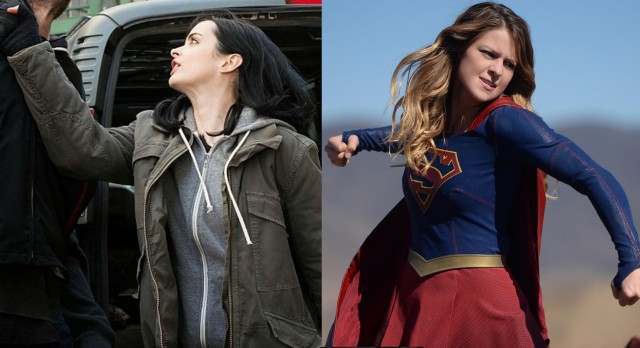 Jessica Jones could lift your car and stop it with no effort. If she’s ever knocked down, she’ll punch back several times harder. No matter who she’s talking to, her snarky attitude will come through, because she doesn’t give a shit about formalities—but if you whisper in her ear while she’s sleeping, that attitude turns vulnerable. You’ll find her trembling because of reminders from a hidden past, murmuring, “Birch Street … Higgins Drive … Cobalt Lane,” under her breath to calm down. As another female superhero leads the small screen, she’s much bigger than any of the ones you see in movies.

With the debut of Jessica Jones on Netflix, Marvel offers a female protagonist who’s darker and grittier than anyone in their cinematic universe. A no-nonsense private investigator, Jones (Krysten Ritter) is someone who acts like she doesn’t care but is constantly haunted by her villain’s manipulative mind-control. As a woman with extraordinary powers, she’s trying to weave through a regular life after a failed superhero career. Her story joins the growing number of female superheroes getting their own television series.

In just one year, three top-notch female-led comic book series have debuted on television. As female action heroes like Marvel’s Agent Carter and superheroes like DC’s Supergirl are emerging as protagonists, comic books are following in a trend of women with power on television, as seen in Madam Secretary, Scandal, How To Get Away With Murder, and even Empire’s Cookie. However, what distinguishes superheroes from other female protagonists are the multi-faceted lives they lead that differ from civilian narratives. With the amount of opportunities given, female characters on television are receiving more creative potential and visibility than film has seen in a decade.

It’s been ten years since Marvel’s Elektra (2005) was released, and zero female superhero films have been made. Although DC’s Wonder Woman and Marvel’s Captain Marvel are being produced, about 10 films headlined by men from now till 2017 will be out before that happens. It’s been a struggle to have female comic book characters represented in their own adaptations because studio heads don’t believe in them. Last year’s Sony hack leaked emails from the CEO of Marvel, Ike Perlmutter, listing off female-led movies that bombed at the box office, including Catwoman (2004) and Supergirl (1984). He pointed to these failures as a reason why studios shouldn’t continue to produce female-oriented comic book films. While president of Marvel Studios, Kevin Feige, said to Comic Book Resources that he hopes to create more female-oriented films “sooner rather than later,” the studio still pushed Captain Marvel from 2018 to 2019 in favor of another Spider-Man reboot—the third iteration in 13 years.

No matter how hard Hollywood executives like to pretend it is, the reason these movies fail is not because of female protagonists. It’s the way films portray them that leads to their demise. Instead of focusing on appearances like Catwoman did, television is providing female leads with a better roster of women that elevates the plot.

Within the first half hour, Jessica Jones already introduces more women than most series have—all playing a vital role beside the lead. There’s Jones; her famous best friend, Trish Walker (Rachael Taylor); Hope Shlottman (Erin Moriarty), who’s fighting through the same trauma as Jones; and successful defense lawyer Jeri Hogarth (Carrie Anne Moss), whom Jones frequently works with. Sexual diversity is also illustrated between female characters and their relationships, which hasn’t been commonly seen in comic book adaptations. Alongside Jones’ narrative, each of these women can stand as their own characters with flaws and issues.

The show also contrasts others by going beyond the origin story. Compared to Supergirl’s Kara Danvers, Jones is past the stage of being an optimistic and bubbly beginner. Despite both being in a superhero universe, these women bring different personalities and perspectives to their roles. The problems they face are complex and realistic—especially Jones who faces post-traumatic problems, and Danvers with sexism in the field. With the way these protagonists are written and portrayed, they’re well-developed and memorable compared to characters seen on film.

Perhaps this is why television can make female characterization work better. Filmmakers don’t have faith, because to them, it’s risky. Hollywood’s big-budget productions are reluctant when past female-led films couldn’t make back what they spent. Yet, because of their reluctance, creators are sloppy in their attempts to provide well-thought out narratives for female protagonists. Creating on television minimizes risk and allows creators to start fresh.

Television is also flexible. Taking risks and fixing them in a matter of episodes is an affordable luxury only available to television. Since Jessica Jones is on Netflix, a streaming platform that allows viewers to binge-watch every episode without even stopping for ads, there’s less limitation. The gradation of shows on network television and independent companies can differentiate the tone of a show and its characters. Jones already demonstrates more openness about her personal drinking habits and sexual drive in a few episodes than any superhero on the big screen has in their PG-13 rated films. When female protagonists are depicted on a free-ranged platform, their representation is able to be out-there and unconventional without film ratings or sponsors present to affect their characterization.

Although risks remain whether it’s television or film, the new dominance of women in leading roles on television could be the right track to getting better female protagonists back on the big screen. While Jessica Jones is a different superhero from Supergirl or any other individual, each of these characters are unique and cannot be replicated. Their variety assures for future female protagonists of comic book adaptations to not only provide representation, but to become well-developed characters that can stand their own ground in both film and television.

Oriena Vuong is currently a freelance journalist based in Toronto. She often writes about pop-culture and comedy or live-tweets everything she watches on television. As an arts enthusiast, she loves to fangirl about anything from comic book and films to musical theatre. You can find more of her work on orienavuong.strikingly.com and follow her crazy tweets at @itsjustoriena.