How the NES Zapper Works Though the gaming industry was still a fledgling widdle baby back in when Duck Hunt released, and wasn’t even close to encroaching upon staleness, it still mirrored the current industry trend of developing new ways to control games. Among peripherals like the Power Pad, the NES Zapper became the most popular, and its inner workings astounded many people way back when.

It turns out the magic behind the Zapper is actually more of a simple workaround, much like the controller for Nintendo’s current console, the Wii (read: “sensor” bar so simple it can be replaced by candles). Basically, when one pulls the trigger on the Zapper, the television blacks out for one frame to give the light sensor inside the Zapper a reference point, then the game turns the in-game targets to white while the screen is still black, and if the Zapper’s light sensor detects the change from black to white, the game knows you were aiming at a correct target.

The way the Zapper worked meant a player could aim early model Zappers toward a bright enough light source, pull the trigger, and the game would think the player hit the target, even though the player wasn’t even aiming at the television.

In Japan, the Zapper was called the “Family Computer Beam Gun,” and looked more like a real gun: 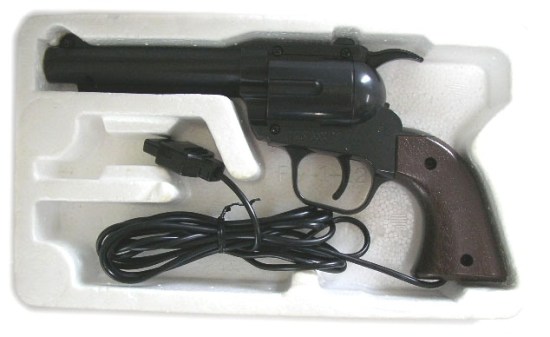 Who is going to find their old NES, their copy of Duck Hunt, and shoot their lamp to see if the trick works for their models?

(via Today I Found Out)