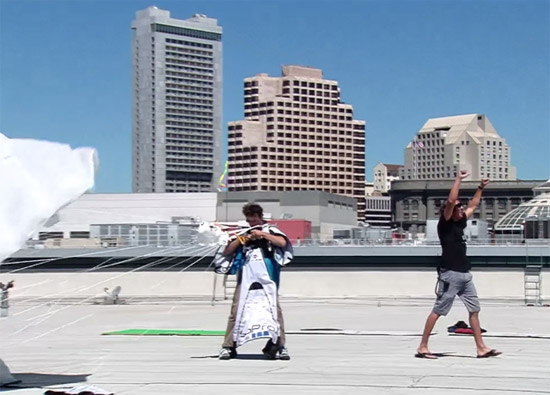 The Internet was pretty collectively stunned just two days ago when a group of skydivers wingsuited down onto the Google I/O conference. That alone wasn’t really that noteworthy, but the fact that they livestreamed the experience in a Google Hangout using Google Glass was downright jaw-dropping. Now, we finally get a look at how they pulled it all off.

In the moments before the stunt, Google co-founder and Glass enthusiast Sergey Brin warned the audience that there were about 500 ways this could go wrong. Thankfully it turned out to be a flawless execution, aside from some video stuttering. According to TechCrunch, this was because an entire team at Google spent the better part of six weeks putting it all together.

What did all that entail? Tracking down a group of wingsuiters, to start, but also working with the local government to get clearance to jump over San Francisco, developing special filters for the Google Glass devices that were free-falling, and then fretting about the weather ruining their demo. Not to mention using 10 cameras to follow the jumpers’ progress in addition to the 11 Google Glass prototypes they wore while falling, and an additional three cameras at the conference itself. Oh, and a zeppelin. They needed to get a zeppelin for these guys to jump out of and a helicopter to film the zeppelin.

That was just the easy part. TechCrunch’s report outlines two major hurdles that Google needed to overcome. The first was the fact that FAA regulations do not allow for a zeppelin’s doors to be open while in flight. However, if the self-driving car project has taught Google anything, it’s that lobbying is a highly effective tool. From TechCrunch:

But, they [Google] were able to work with the San Jose FAA branch to add new rules to the operation manual for zeppelins so they could open the door and jump. As a result, Google says the jumps were the first ever legal zeppelin skydives using wingsuits in the U.S. (I’m guessing there haven’t been any illegal ones either.)

The second, and perhaps most speculated over, challenge was maintaining constant contact with the jumpers throughout their descent. Again, from TechCrunch:

It’s not easy to get Internet bandwidth for a skydive nearly a mile up in the air. It’s too high for cell coverage and regular WiFi isn’t reliable enough. Google says their team tried several approaches. They tested using a wok (that’s not the name of a special antenna, they are talking about the cooking tool) with a mifi 4G LTE hotspot connected to it. But that wasn’t used during the live demo. Google hasn’t revealed what their solution was, but they say it was very much cheaper than high-end professional equipment.

All that work certainly paid off as the stunt not only was a great way to wow audiences, but it showed off just a taste of what Google is hoping to achieve with their Project Glass. Now we just need to figure out what non-wingsuiters can use it for.