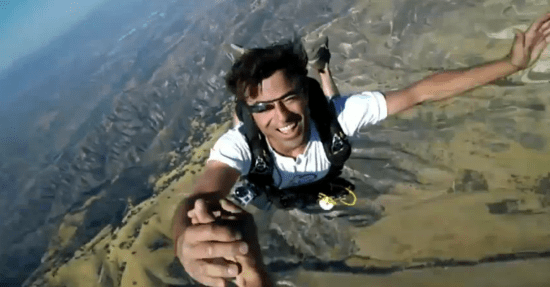 In addition to the Nexus 7 tablet and the Nexus Q streaming device, Google trotted out their most futuristic piece of hardware at their I/O conference keynote: Google Glass. Actual devices that are even close to what you might consider consumer-ready are still a ways off, but working prototypes abound, and Google has made use of that to create an insane spectical. During today’s keynote, some dudes jumped out of a plane wearing the high-tech glasses, and streamed video of their fall live to a Google+ Hangout. We’re living in the future, folks. See the video after the break.

Surely there are a lot of features to Google Glass that either haven’t been implemented or don’t work quite right yet, but the video capture — arguably it’s simplest feature — seems pretty ready. During the sky-diving-out-of-a-blimp-wearing-a-wingsuit stunt, video seemed to be coming in pretty well. There was a bit of stuttering, but all in all it wasn’t bad considering the footage was streaming live from free-fall on a device that’s smaller and more sophisticated than the lion’s share of currently available consumer tech. You can watch a re-cut version of the spectacle below.

So what else do we know about Google Glass now? Not much more than we did before, but we did learn roughly how much the devices might actually cost when they come out. That’s not to say that Google announced an actual price, but they did announce that I/O attendees will be able to pre-order a prototype model of Google Glass that is intended to ship early next year. How much is that prototype going to cost? Oh, just $1,500.

All told, if Google Glass lives up to the hype and is as much (if not more than) a “wearable computer” as it is a mobile device, the price might not be that outlandish. After all, Apple is selling a MacBook that’s, like, two grand. Of course, Google Glass is offering a very, very different kind of functionality.

That said, the price could go down, or up, before a final release. Google itself certainly isn’t claiming that the cost of the prototype has anything to do with the price of the final product. Still, it gives you a feel for the quality of the hardware that must be in those suckers. Google Glass glasses are still a way off, but they definitely aren’t some kind of vaporware; not only have we seen them in action, but Google is willing to give developers a chance to go nuts with them in only a matter of months.

I still have a weird, mixed opinion on Google Glass. When I find myself thinking about it, my thoughts keep snapping back and forth between “this is so stupid” and “this is so awesome.” It’s a real doublethink-y kind of experience. Of course, things should really start heating up once devs start playing with Google Glass out in the wild, and I’m sure I’ll be forced to solidify my opinion into one camp or the other.

I really hope it falls on the awesome side. I want to believe.