Scientists May Know How Dinosaurs Got So Big | The Mary Sue 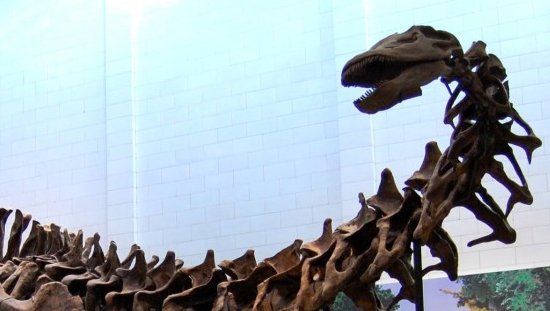 Paleontologists  struggle with a lot of mysteries in their field of study, not the least of which is exactly what allowed some dinosaurs to get so insanely huge. In particular, the enormous necks of sauropods like brachiosaurus, diplodocus, or sauroposeidon (tallest of all dinosaurs, 56 feet in height) have long baffled researchers.Well, there’s a new theory about this, as some scientists suggest that unique respiratory traits and reptilian reproduction strategies allowed for such tremendous sizes and necks that have been unparalleled by any creature since.

Speculations about how dinosaurs got their growth spurts are many, and some of them suggest environmental factors like high oxygen levels or an overabundant amount of food. Strangely, baseball legend and noted non-paleontologist Jose Canseco recently tweeted that Earth may have had a low gravity in the old days, and that could explain the big animals our planet used to boast. This is not only an entertaining idea, but a great reminder of why we don’t get our science facts from has-been steroid abusers on social media.

Science writer Brian Switek has introduced a new theory, though, citing the studies of sauropod experts Michael Taylor and Mathew Wedel. The environmental factors could be real, if unlikely (except the gravity thing, which is just silly), but wouldn’t have acted as catalysts to the unheard of growth of sauropods. Rather, sauropods possessed a network of air sacs in their respiratory systems that made their bones, like those of birds, much lighter without the sacrifice of strength. With lighter bones, their necks could grow exceptionally long — in some cases nearly half the length of the dinosaur’s body.

Their heads were small, too, with no need for the musculature needed to chew the plant matter they consumed; they didn’t chew, and it’s still unknown just how they processed such vast amounts of food without a juicer. In any case, sauropods had the sheer body mass to support such long necks and tiny heads, proportionally outstretching the giraffe. 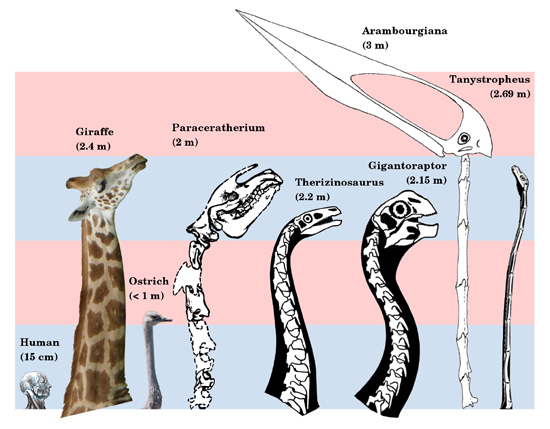 These are the necks of non-sauropods, who don't enjoy the luxury of super-long necks. Also, that's not a good place for a human to be standing without his face.

Then there’s the fact that sauropods were reptiles. Young sauropods were tiny — and probably adorable — and would have been numerous. Where mammals expend greater time and energy carrying and developing their young, dinos would unleash their brood en masse in expansive nesting grounds.

By externalizing birth and development, sauropods and other dinosaurs were able to sidestep the costs and risks that constrain mammal size. For dinosaurs, mechanical and other biological constraints might have prevented them from becoming even larger – the amount of time it would take for nerve impulses to travel to a 100-foot-long dinosaur’s brain for example. The fact that all the genera that are contenders for the “largest dinosaur of all time” title – including Argentinosaurus, Supersaurus, and Diplodocus – top out around 100 to 110 feet in length might indicate that these dinosaurs were reaching the anatomical ceiling of how large it was possible for them to get.

Even combined, these factors created a broad threshold for size, but they didn’t necessarily give the great sauropods their gigantism. That much is still a mystery. Short of visiting Skull Island with a well-equipped team of experts, the slow, unstoppable plod of paleontology may be the only way to unravel the mystery.

(National Geographic, images courtesy Wikipedia and From Taylor and Wedel, 2013 on svpow.com)