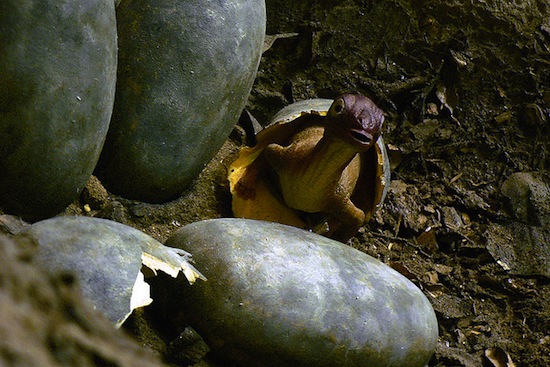 Outside of The Land Before Time movies, dinosaurs aren’t exactly creatures noted for their tight familial bonds. One researcher, though, is suggesting that dinosaurs may have been more caring parents than we suspected, even going so far as to feed their babies a milk-like substance rich in antibodies and growth hormones. While lactation is unheard of in reptiles, Professor Paul Else points out that birds like flamingos, penguins, and even the humble pigeon produce “milk-like” substances, so it’s not wild thinking to suggest that some dinosaurs may have had the same capacity to make something we’d very much like to try on our breakfast cereal… though probably only once.

Else is quick to point out that this lactation would have been very different from mammalian breast-feeding, and that the “milk” wouldn’t be a dairy product as we know it, though it would serve largely the same purpose — delivering a substance with lots of nutritional content and other additives that is easy for a young creature to digest. Professor Else says:

“Pigeons, emperor penguins and flamingos all produce ‘milk-like’ substances from crop glands or glands of the oesophagus that they feed to their young through their mouths… Since birds and dinosaurs share much in common I proposed that some dinosaurs likely used this feeding strategy.”

While surprising, the theory — which Else published this week in the Journal of Experimental Biology —  could explain some mysteries about dinosaur life cycles. A diet of a milk-like substance full of growth hormones could be part of the reason that baby dinosaurs seemed to grow at such a prodigious rate — a similar hormone helps baby pigeons grow extremely fast in their youth.

Unfortunately, since dinosaur soft tissue didn’t hold up well under the stresses of fossilization, there’s no way to prove or disprove the theory for now. It seems we’ll instead just have to wait till we can clone dinosaurs and see if any of them start making milk. If there is any better reason for ramping up Jurassic Park related research, we sure haven’t heard it.

(via Journal of Experimental Biology)