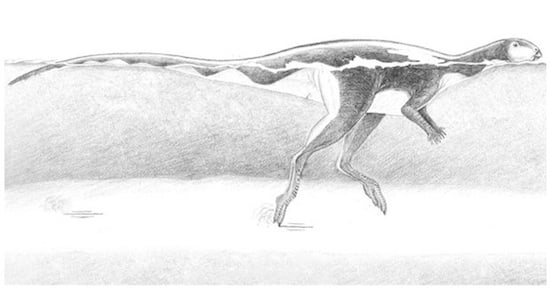 For year’s, Australia’s Lark Quarry has been cited as a rare example of a dinosaur stampede frozen in time, the tracks this massive “running of the giant lizards” left behind captured forever in stone. A new analysis of the tracks, though suggests…not so much. According to researchers from the University of Queensland, the tracks have been misread for years, and represent not a sudden stampede, but a popular river crossing used by many dinosaurs over many years. Because dinosaurs do not wait for conditions to improve, and they most certainly do not pay to cross at a bridge. Dinosaurs ford the goddamn river.

The explanation would clarify some items like the strange “tip-toe” tracks left behind by some dinosaurs, says Anthony Romilio, a paleontologist at the University of Queensland and lead author on the paper:

“Many of the tracks are nothing more than elongated grooves, and probably formed when the claws of swimming dinosaurs scratched the river bottom.Some of the more unusual tracks include ‘tippy-toe’ traces – this is where fully buoyed dinosaurs made deep, near vertical scratch marks with their toes as they propelled themselves through the water.”

That’s right — these strange tracks could indicate that small dinos –some not much larger than a modern day chicken — made their way across by bouncing across the bottom of the river. Of course, the only appropriate thing we can say to this is “Awwwwwww, bouncing dinosaurs!”

They weren’t the only ones using the crossing, though — larger dinosaurs who left more well-defined, easy to ready tracks were probably wading across the river at the site. They probably weren’t carnivorous T-Rex relatives, though, but herbivores about the size of emus. So rather than a stampede of dinosaurs with carnivores loose among them, Lark Quarry was more akin to a sleepy waterside township full of vegetarians. Less exciting, yes, but pretty interesting in its own right.

Researchers are quick to point out that they’re not trying to take anything away from the importance of Lark Quarry — the team says the site’s up to 4,000 exposed examples of  dinosaur tracks are still a very important part of the continent’s natural history. Just not in the way that was long thought. Here’s to adjusting expectations — even if the idea of a dinosaur stampede is like, super-cool and we miss it already — and learning what sort of things this new perspective on the site could teach us about dinosaur behavior.