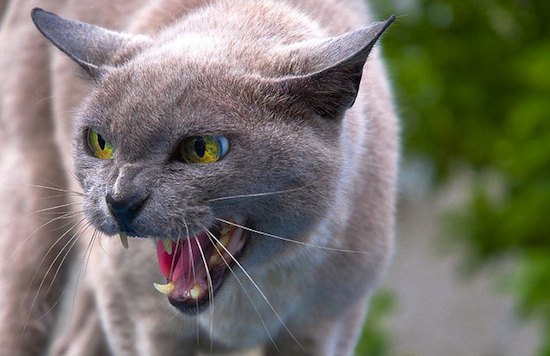 In a recent survey from across the pond that may dampen the Internet’s unwavering devotion for funny felines, scientists have concluded that domestic cats in the United Kingdom are posing a serious threat to local bird populations, which has steadily declined over the years. Conservationists have since been trying to convince obstinate cat owners to be more mindful of their pet’s hunting behavior and look into options that would prevent any more birds winding up dead on their doorsteps. If action to protect native bird species isn’t taken soon, the U.K. is going to be known as the crazy cat lady of the world.

The University of Reading’s Dr. Rebecca Thomas had initiated the survey in response to the scientific community’s longtime sneaking suspicion that house cats and their high densities in urban areas were responsible for the decrease in the population of birds that resided in towns and cities. Thomas surveyed various owners, questioning them on the number of small creatures they brought home, their opinion on this behavior, and whether or not they were inclined to remedy this situation.

The results of the survey showed that nearly 20% of domestic cats had returned with four or more dead animals a year, with only 22% of owners having been gifted with these critter cadavers. Factoring in the knowledge that cats tend to take one out of the three animals they preyed upon back home, on average, scientists estimated that each individual cat in the study makes 18.3 kills a year. It may not seem like much, but according to Thomas it is a cause for alarm:

The density of cats in urban environments is the biggest issue. Even if a cat isn’t killing often, there are so many of them in a small area that they can have a very serious impact. Owners might think their cats only catch two or three birds a year and that won’t make any difference, but they need to understand all the other pressures that wildlife is under from habitat loss and environmental change.

Cat owners in Thomas’ survey never considered the impact their cat’s activity had on the environment, many of them believing that the ultimate effects were either nominal or nonexistent. To further substantiate her research, Thomas questioned owners and non-owners about methods to deter cats from hunting birds. Some options were extreme, such as having them declawed, implement a kitty curfew, or ban the ownership of cats in dense residential areas. Obviously unpopular with those who took part in the survey, humane alternatives including mandatory sterilization and having a bell affixed to collars as a means to warn birds of a cat’s approach were more acceptable, with a willingness to go through with them if need be.

In addition to these suggestions, Thomas advocated that home owners take steps to make their yards bird-friendly by planting gardens and setting up bird feeders to encourage population growth. But we guarantee in an ironic fashion that the United Kingdom will start experiencing a sudden boom in the number of birds and be left wishing they had a few spare cats lying around.

(via Phys.org, image via Hannibal Poenaru)