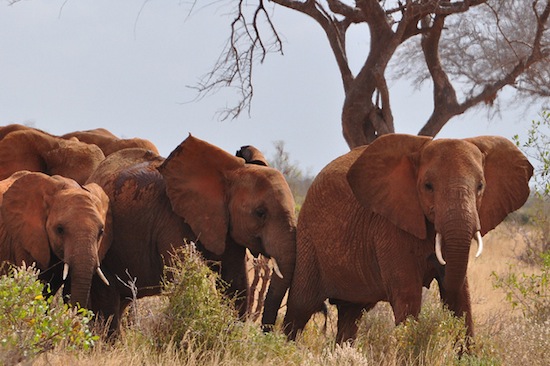 In news that would make for a solid first act of a Disney movie if it wasn’t already the sad, horrible truth, Kenyan authorities are trying to find a team of poachers who killed an entire family of elephants in Kenya’s Tsavo East National Park. In what’s being described as the worst incident of poaching in Kenya’s long history — which isn’t exactly short on horrific incidents of poaching –– a family of 11 elephants was slaughtered by what police believe to be a 10-person strong gang of poachers who escaped with the elephants’ hacked off tusks, which will likely be shipped off to foreign markets to make trinkets, baubles, and pieces of jewelry from the ivory. Because human beings are terrible, that’s why.

According to a statement from Kenyan Wildlife authorities, the family of elephants were shot dead on Saturday. Each of the 11 animals was found with bullet wounds, and was missing its tusks, which are a hot commodity in black markets the world over. Demand for ivory hasn’t cooled since Kenya outlawed trade in the substance in 1989, hoping to stem the loss of elephants in the country.

While authorities say they are on the trail of the gang of poachers — who we have to assume are cartoon super-villains of some sort, because what kind of real person could do that — with rangers tracking them on the ground and from the air, the rangers have a daunting task ahead of them. Tsavo East National Park is one of Kenya’s largest protected areas, covering about 8,500 square miles. That makes it a great environment for large animals like elephants — about 13,000 of the animals, which are listed as a vulnerable species in Kenya — live in the sprawling park. That size can also make it difficult to track down poachers in the area, who have a head start on authorities and a wilderness nearly the size of the state of New Jersey to hide in.

Even if the poachers are caught, Kenya’s badly outdated poaching laws mean that even the stiffest penalty will be a slap on the wrist. The fine for being caught with an illegal game trophy like a tusk is a mere $120 along with a jail sentence of no longer than one year. Considering that just a pound of ivory can ell for as much as $1,000 when it makes it to semi-legal markets in China, there’s really no impetus for poachers not to hunt illegally. Unless they’re interested in being, you know, decent humans. Which these guys clearly are not.