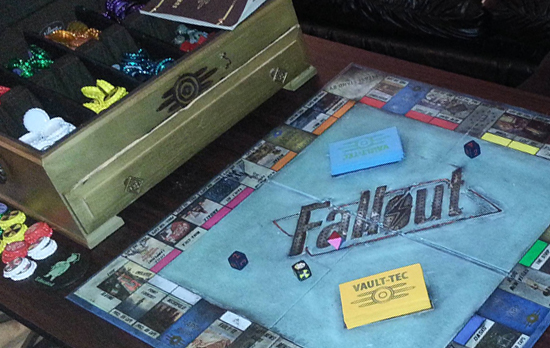 The only way you can make Monopoly an enjoyable game is to add zombies, some dystopian sci-fi, or possibly the Powerpuff Girls, but you know what else might work? The post-apocalyptic, alternate history trappings of the Fallout video game series. Which is exactly what someone on Reddit totally did for their wife’s birthday.

In a display that can make fellow husbands dumbstruck and gamer wives jealous, Redditor XsimonbelmontX made a custom board and a ton of pieces based on Fallout. It took him 8 months to put it all together, including engraving the Fallout logo into the top of a jewelry box.

Wife is a huge Fallout fan. I told her, “your birthdays are going to be really, really disappointing from now on.”

XsimonbelmontX acknowledged that he isn’t the first to do something like this, but he took pains to make his original. It certainly looks sweet, and I’m betting this version of the game would actually be satisfying to play. Unlike normal Monopoly.