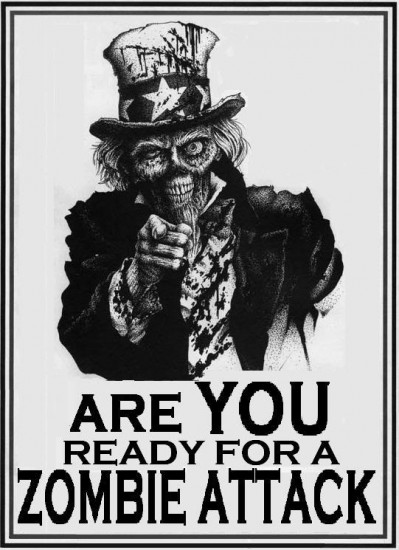 The Homeland Security Department told us we should be prepared for a zombie apocalypse in an online seminar this past week. Do they know something we don’t?

ABC writes, “A few weeks before the government’s Zombie Awareness Month in October, FEMA’s monthly webinar Thursday discussed the success of the Centers for Disease Control’s zombie-preparedness campaign and how other centers can use pop culture references – even fictitious ones like the walking dead – to promote gearing up for real disasters.”

Their idea is, if you’re prepared for zombies, you’ll be prepared for real disasters and emergencies like terrorist attacks, hurricanes, earthquakes, tornados, or some real infectious disease outbreak.

“Zombie-preparedness messages and activities have proven to be an effective way of engaging new audiences, particularly young people who are not familiar with what to do before, during or after a disaster,” said Danta Randazzo, a member of FEMA’s individual and community preparedness division. “It’s also a great way to grab attention and increase interest in general.”

“We have a very small office and an equally small budget, so we had to do something that wasn’t going to take a lot of man power or dollars,” said Maggie Silver of the CDC.

The CDC has previously issued a statement about what they would do in case zombies started appearing and put out a comic book guide to surviving a zombie apocalypse. But they were also the folks who very seriously denied a zombie outbreak a few months ago when zombie-like attacks occurred within weeks of each other. Agency spokesman David Daigle told the Huffington Post, “CDC does not know of a virus or condition that would reanimate the dead (or one that would present zombie-like symptoms).”

FEMA’s seminar came just a few weeks ahead of Zombie Awareness Month and hoped some of the 400 emergency-management professionals who listened in would use their more creative tactics in their own efforts to prepare citizens for real disasters.

Of course most of their advice makes sense, having extra medicine, fresh water, flashlights etc. on hand but I’m not quite sure my katana is going to come in handy in the event of a hurricane. Better safe than sorry though, right?