All I Want for Passover Is This Harry Potter Haggadah 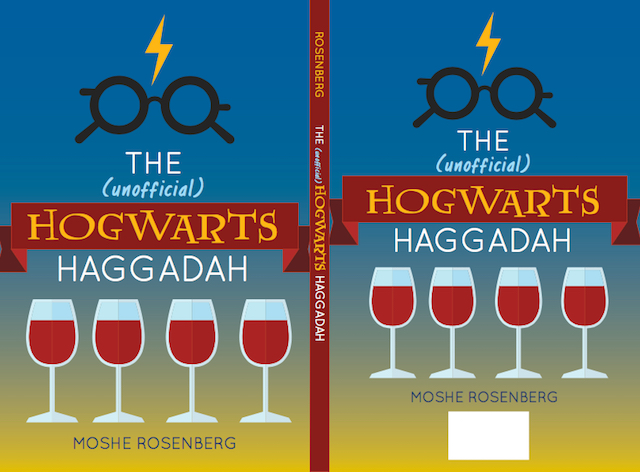 Passover has long been my favorite Jewish holiday. The celebration involves singing, eating, storytelling, and four required cups of wine. But Passover just got even more magical, thanks to “The Unofficial Hogwarts Haggadah.”

When I saw my friend SM Rosenberg post about the Hogwarts Haggadah on Facebook, I had to learn more immediately. What I didn’t know then was that she was closely tied to its production. Turns out that SM’s father Moshe Rosenberg, a congregational rabbi in Kew Gardens Hills, Queens, “has been combining Harry Potter and Judaism for educational purposes for almost 20 years.” His Harry Potter writing club for elementary school kids was featured in The New York Times back in 2001.

Rabbi Rosenberg came up with the idea for a Harry Potter themed Haggadah years ago and decided to go the self-publishing route. Working with graphic designer Aviva Shur, they have now brought it to the page—and it can be part of your upcoming Seder. Get ready for a Pesach filtered through Harry’s famous glasses. 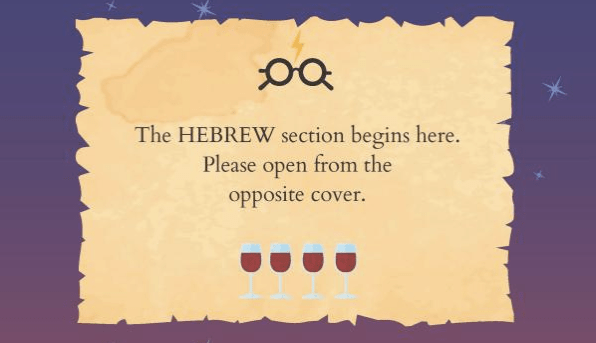 The Haggadah is a text that acts as a guide through the order of the Passover Seder. One of my favorite things about Passover is that no two Seders are the same. I’ve seen feminist-oriented Haggadahs, Haggadahs centered around the music of Passover, and most often attend Seders where the Haggadah is lovingly pieced together from different books—a sort of pick and choose your own traditions. Currently popular on Amazon is a Haggadah themed after baseball, and one by the writer Dave Barry. As we speak, Rabbi Rosenberg’s take on Harry Potter and Passover is the #1 bestselling Haggadah.

Did we mention that it features Harry Potter-themed songs, to be sung in the key of Passover staples like Chad Gadya?

SM tells me that her father found the boy wizard’s adventures and Passover a natural combination, “because HP and Passover share so many basic themes—education, parent/child relationships, sharing one’s wealth.” They have been thrilled by the enthusiastic response to the Unofficial Hogwarts Haggadah: a Facebook page to measure interest got 1,000 likes in a week. They have sold over 2,000 copies since the book’s debut March 14, and are now working with distributors to get the Haggadah in stores across the country, and to countries like Israel, Australia, and Canada, where it is in demand.

I love this response Rabbi Rosenberg gave to an interview in The Forward Reviews:

Q: “Which of the Hogwarts students do you think would host the best seder, and why?”
Rabbi Rosenberg: “The point of the seder is to make it about the participants and enable them to apply the lessons of the Exodus to their own lives. The seder leader must guide without forcing. For that reason, Hermione, knowledgeable as she is, would drive everyone crazy. I’d have her there, in an advisory role, but I’d want ideas for activities coming from Fred and George Weasley.”

Passover is coming up soon, and you have a chance to win an autographed copy of The Unofficial Hogwarts Haggadah through SM’s Nice Jewish Fangirls podcast this week.  They’ll be hosting Rabbi Rosenberg as a guest and “diving into the links between the magical world and the Jewish holiday of redemption.” Now if you’ll excuse me, I have to go think about Fred and George Weasley organizing the hunt for the akifoman.

[The Unofficial Hogwarts Haggadah at Amazon]