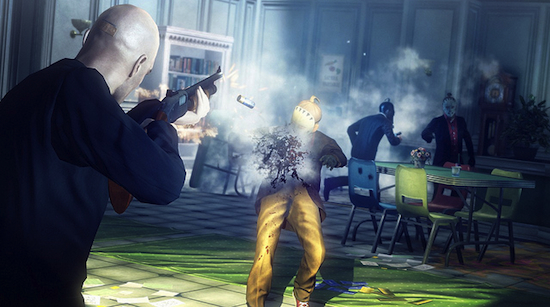 Had enough of your friends constantly flooding your Facebook page with invitations for FarmVille or parties you don’t care to attend? Square Enix has a solution: Put a hit out on them! Rather, you could have a few short hours ago before the option to do so was pulled completely from Facebook. In an ill-conceived and terrifying marketing campaign for Hitman: Absolution, users were able to select targets from their friend list and have them wiped out in cold blood for an assortment of colorful, eyebrow-raisin’ reasons.

Whether notified through email or Facebook proper, Square Enix hoped to drum up hype for Hitman: Absolution by encouraging Facebook users to put a hit out on their friends. An inquisitive and bloodthirsty few who heeded the game publisher’s murderous call to arms were sent to a page where they could set up the hit, including a litany of identifiable features series character Agent 47 could use to seek out his quarry. Questionable and soul-crushing choices included “her ginger hair,” “her awful make-up,” “her annoying laugh,” and other unsavory descriptions too awful for this site to repeat.

Upon the careful selection of your scathing verbal putdown, you were next presented with a list of justifiable — by the game’s standards, most likely — reasons why this particular friend of yours deserved a bullet to the head. Once all that boring business was complete, the target was greeted with an alarming message notifying him or her that they’re about to do die, as well as a readout of their hideous distinguishing feature and reason for termination. Next, the now flustered victim was treated to a video of Agent 47 committing the gruesome deed.

Accused of promoting cyberbullying and threatening people via the Internet, it’s really no surprise that Square Enix pulled their Hitman: Absolution campaign before anyone else got to try it. To save face, the publisher sheepishly stated:

Earlier today we launched an app based around Hitman: Absolution that allowed you to place virtual hits on your Facebook friends. Those hits would only be viewable by the recipient and could only be sent to people who were confirmed friends.We were wide of the mark with the app and following feedback from the community we decided the best thing to do was remove it completely and quickly. This we’ve now done.

We’re sorry for any offence [sic] caused by this.

If you happen to be one of those people who had a put a mock hit out on their friends and family, maybe you should give your grandma a call before she logs in to her Facebook profile. Unless you really want to take a car ride down to the nearest police station.