Where is Hester Shaw's Scar in the 'Mortal Engines' Movie? | The Mary Sue

Where is Hester Shaw’s Scar in the Mortal Engines Movie? 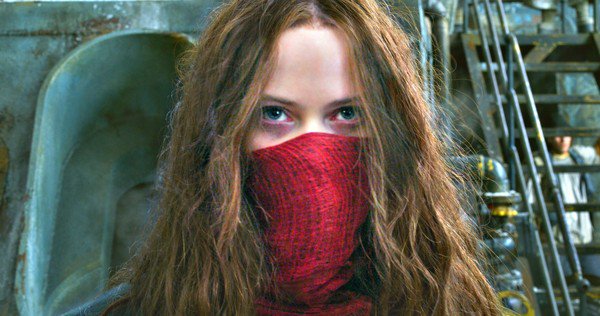 After we posted the first teaser trailer for the film adaptation of Philip Reeve’s Mortal Engines, our sharp-eyed commenters called out the production for seriously skimping on protagonist Hester Shaw’s prominent facial scar. In fact, in the trailer, no scar was visible at all.

As commenter Starshine pointed out, in Reeve’s book, Hester’s appearance is made extremely clear: “A terrible scar ran down her face from forehead to jaw, making it look like a portrait that had been furiously crossed out. Her mouth was wrenched sideways in a permanent sneer, her nose was a smashed stump, and her single eye stared at him out of the wreckage.”

Search for fanmade visions of Shaw, and you’ll find the book’s fans loyally recreating her based on Reeve’s description. 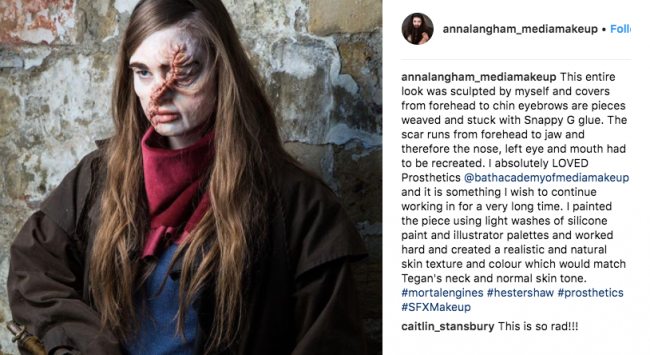 But in the brief trailer released for the Peter Jackson/Fran Walsh/Philippa Boyens-written and produced movie, Hester, who is played by Icelandic actress Hera Hilmar, looks like this: 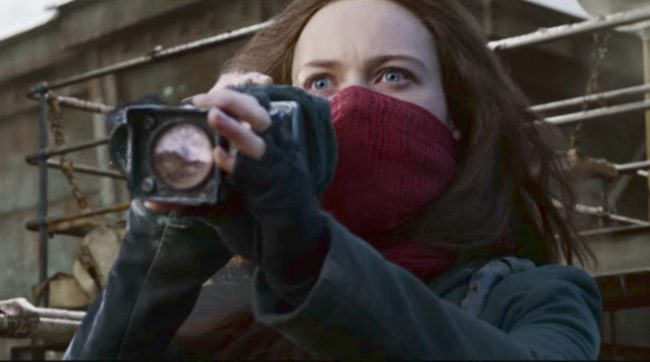 Now, it’s possible that beneath that scarlet scarf the filmmakers are planning to give Hester significant scarring. But I’m already flinching to think it may be played as some kind of dramatic reveal rather than an intrinsic part of her character that’s impossible to conceal. Either way, the fact remains that they’ve changed Hester’s appearance irrevocably, giving her both eyes and eliminating the part of her scar that began at her forehead.  This is not meant to be something that can be prettily hidden with a tasteful scarf. She is a portrait furiously crossed out.

She would have looked amazing with a big scar across her eye, and much more memorable. They didn’t have to go full on facial features removal, but a big scar and a white pupiled eye would have been a great character design for that world.

Layn demonstrated the impact of these features on Hester’s character—it made her unforgettable:

… this is bullshit. This isn’t what she looks like. Heck, I had forgotten her name, but not how she was described.

Rusty Shackleford pointed out that this erasure of Hester’s scar ironically echoes a similar instance from the series:

Life imitating art. Remember in the third book when Pennyroyal publishes an “account” of their adventures, and Hester is described as the “horribly disfigured aviatrix” with the cover art depicting a beautiful woman bearing a “cute little scar”.

This is disappointing, the female main character, Hester Shaw suffered a sword blow to the face, which wrecks her eye, and leaves a scar from ‘forehead to jaw’ and her nose a ‘smashed stump’. Her face is generally referred to as a wreck throughout the book.

Looks like she has two fine eyes and everything is below the cheekbone. Why? Why not make it bad? The point of Tom and Hester’s relationship is that it isn’t based on aesthetics.

[…] Jackson missed an opportunity by not letting the makeup FX department go to town on the injury. No courage there, though I applaud him for his Weinstein comments.

While it’s true, as some pointed out, that facial makeup is expensive and tedious to render for the actor, it’s hard to think that the team behind turning hundreds of people into Orcs couldn’t figure out something more creative and true to the character. There are few enough female protagonists, especially on film, who are allowed to look anything less than perfect—Furiosa in Mad Max: Fury Road made waves and was a big step forward with her prosthetic arm, but her face was still Charlize Theron’s with a bit of oil grease.

Apparently, filmmakers aren’t at the point yet where they’ll trust the audience to get a first look at a movie without a seemingly flawless woman in the lead—even if that woman’s appearance from her canonical origin is essential to who she is. This is an awful erasure and a terrible message to send to Mortal Engines‘ existing and future fans. Imagine being, say, the young, impressionable, voracious reader that I was once, who goes out to read the book after loving the movie, only to find that Hester’s appearance was deemed unacceptable by the creatives—something to be diminished and covered. The message that this sends is hugely problematic

Giant, resource-hungry, mobile cities engaged in roaming a post-apocalyptic, steampunk world? Those we can accurately render. But a female protagonist who at first sight is anything less than mega-hot? That’s a step too fantastical for Hollywood.