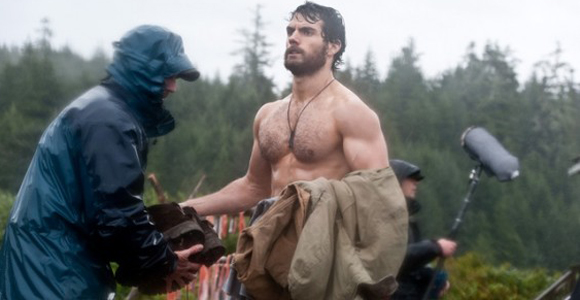 No matter what your physical characteristics, I think everyone has dreamed of being Superman at least one point in their lives. Compare that with the number of people who actually live to see it become a reality and you have a lot of shattered dreams. Luckily, Henry Cavill never had to sit in a corner and sob since he’ll be playing Superman in Zack Snyder’s Man of Steel. He’s being doing the interview rounds lately and as it turns out, playing the Big Blue Boy Scout is just as awesome as it sounds.

The British actor has been doing press junkets for his next feature, Tarsem Singh’s Immortals, and is obviously having to field tons of Man of Steel questions. It’s both a blessing and a curse for Cavill that Immortals needed him to be in top physical (read insane) shape for the role. It meant he had to continue a very arduous work out routine to play Superman but he was at least in great shape going into it. And great shape is putting it mildly as we’ve seen a slew of shirtless photos crop up the last few weeks showing just how dedicated the actor is to the role.

“That’s only once sequence, a small sequence in the movie. It’s just people like to take a lot of photographs of it when they get the opportunity,” he explained to Access Hollywood much to the dismay of swooning fans. “It’s an essential thing for something like Superman. You’ve got to prove to everyone that it’s a super man, it’s not all fake, not all smoke and mirrors.”

We’ve been impressed with his physique and Cavill isn’t shy about highlighting his efforts, “It’s an eight pack!” he said of his abs though he was also impressed with himself fully clothed in the iconic costume. “I got to see it through various prototypes and stages of development. … But still, the first time I had it all on with the cape, I deliberately didn’t look in the mirror as it was going on. I wanted to have that sort of turnaround moment. Probably one of the best moments of my life, to turn around and realize that I’m Superman. There’s no other feeling like it. That still hasn’t gone, either. Still, when I’m in the trailer, I’m going, ‘this is so cool!'”

However, Cavill is very thankful that he’s not the only one getting enjoyment out of his tenure as the Man of Steel. He spoke with MTV saying, “I think the best part has been recently when people have sort of seen all the work that has gone into it. I think I won a lot of people over, and I felt the support really come behind me, which is a really good feeling, because when you’re doing this all for [the fans], telling a story for them … you want to do it justice.”

He continued, “It’s wonderful to have all the people online going, ‘This is great, this is amazing, I can’t wait, thank goodness it’s him.’ It’s wonderful, so thank you to everyone out there. I do appreciate it.”

You can see Cavill in Immortals next week but you must survive on set photos of Superman since Man of Steel won’t be in theaters until 2013.