Hathaway Could Be Convinced to Consider Catwoman Collaboration 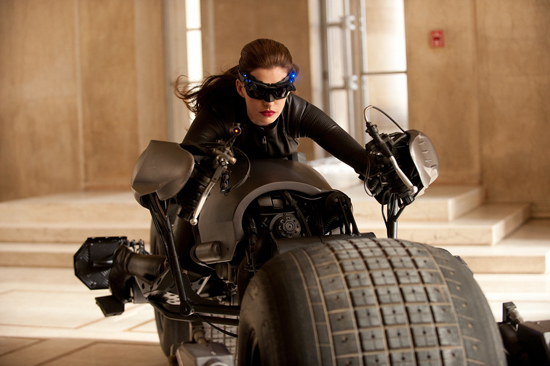 Even if you haven’t already seen The Dark Knight Rises, chances are you’ve been made aware to the fact that Anne Hathaway portrays Selina Kyle. As in, Catwoman. Not that it’s ever explicitly stated in the film. There’s also talk going around as to what will happen now that the trilogy of films is complete and what it means for those who have starred in them. Perhaps, eventually, there could even be a Catwoman spin-off.

By which I mean Catwoman the character and not Catwoman the film starring Halle Berry. Because, I think we can all agree, that should never ever be given a sequel, spin-off, or anything like it. However, Hathaway’s performance as Kyle might actually warrant further investigation. Without spoiling anything, there are certainly still questions to be answered about her. Be it prequel or sequel, a movie exploring these nuances could prove interesting.

Hathaway certainly seems interested. Speaking with Digital Spy, she had this to say on the matter:

I think it would be lovely to see more of her but only if it’s with the right people […] She lives in this Gotham City and so it would have to be established by the people who have made this Gotham City. For me, at least.

Granted, this isn’t confirmation or even the rumor of confirmation. This is a wisp of a hope on a dream of a kiss from a rose on a grave. But at least there’s that.